Not so long ago, an image did the rounds on the Media that is Social that appeared to be an illustration of Lystrosaurus, except that it was suffering from a severe case of the cephalothorax. It was apparently from a kids’ dinosaur book, and soon other illustrations from the book began to emerge. I was intrigued. Happily, Adrian Wimmer had a copy of the aforementioned book that he was willing to let me borrow…and so here we are. Is it heavily stylised, or just quite badly drawn? It’s a fine line, indeed…and you might want to have some booze handy. 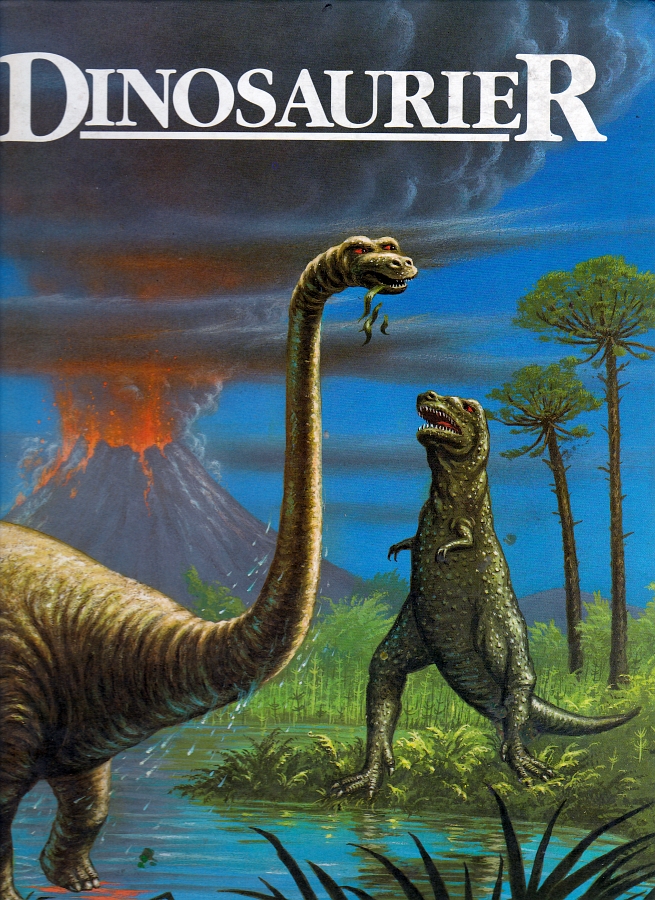 Adrian’s edition might have the extremely utilitarian title of Dinosaurier, but the original English title was The Big Book of Dinosaurs. (Which just seems rather misleading. It’s really not all that big.) It was first published in 1990, with this edition arriving in 1993, just in time for That Movie. Originally written by Stephen Attmore and translated into German by Alfred Klepsch, this would be a rather unremarkable early ’90s children’s dinosaur book if it weren’t for David A Hardy’s illustrations. Or at least, some of them. I don’t wish to denigrate the artist too much (honest); he may well have been unfamiliar with the subject, was working in what was effectively a pre-internet age, and work is work. However, while the backdrops to his prehistoric scenes are frequently lush and detailed – as seen above – the reconstructions of the animals themselves appear to show, er, something of a difficulty in grasping basic anatomy. A few of them are also straightforward copies; the tyrannosaur on the cover is suspiciously Neave Parker-like. (As for the sauropod, well, he’s keeping both eyes on you.)

Incidentally, a quick Google search turns up a site belonging to an artist of the same name who’s very accomplished in painting spacey things. I thought at first that it couldn’t be the same person, but a few featured artworks do suggest it might well be…if you happen to know then, as always, please leave a comment.

In any case, let’s start with a classic March of Progress. Here, the generic ‘amphibian’ (1) gives way to Proterosuchus (2), then Euparkeria (3), itself succeeded by Staurikosaurus (6). In the foreground we have Ornithosuchus (5), which looks like it should be wielding a conductor’s baton, and Lagosuchus, which just looks very depressed. So very, very depressed. This illustration perfectly demonstrates Hardy’s peculiar insistence on giving every animal identical, elliptical, orange eyes. Really – every single animal in this book has the same eyes, frequently far too large for their skulls. Once one notices it, it’s distracting, to say the least.

On to the Late Triassic spread, and blimey, the world’s got a lot busier. A few favourites from the previous spread reappear here, alongside newcomers including a shady-looking Cynognathus and two refugees from Zallinger’s Age of Reptiles mural, skulking Saltoposuchus and Plateosaurus. Here, Lagosuchus (bottom right) looks considerably less depressed and more like it should be squatting on a stone plinth outside a spooky stately home.

I do enjoy how the carnivores are rather starting to resemble one another. There’s more of that.

Although I do admire Hardy’s quite lovely foliage in the Triassic spread, the Jurassic surely features my favourite background art. A thunderstorm is always welcome, and there are some pleasing touches here, such as the water dripping down from the branch on the left. It’s quite an atmospheric piece, but for the fact that the dinosaurs are a mix of the uncannily familiar and the plain weird. The Brachiosaurus and Diplodocus clearly owe a lot to Burian, while the Archaeopteryx resembles Sibbick’s work to me (at least in the colour scheme), but generally harks back to a great many prior illustrations. The quadrupedal Allosaurus is deeply weird. The animal is probably meant to just be crouching down to pursue something on the ground, but that doesn’t excuse its strikingly bizarre anatomy; its forelimbs seem to be completely detached from its body, it doesn’t have shoulders to speak of, and its spindly legs even end in feet with four forward-facing toes. It is, as the Orange One might say, a mess.

The Cretaceous features a few dinosaurs that are reduced to nondescript grey blobs, alongside what are more clearly familiar faces. There’s Rexy on the right, of course, alongside a steamrollered ankylosaur, and a couple of hadrosaurs on the left that are easily recognised thanks to their wacky head crests. The bird is…well, it’s a bird. There were birds. That’s all you need to know. Besides, of far more interest is the peculiar flying beastie, which must be one of the oddest Pteranodon I’ve yet seen. Elsewhere in the book Hardy is quite content to just copy Burian, so where this misshapen oddball came from, I’m not entirely sure. At least we get a pretty waterfall in the background, and the sauropod roaming the swamps is identified as Antarctosaurus. Antarctosaurus! When was the last time you saw that name in a kids’ dinosaur book?

Once the Mesozoic spreads are dispensed with, the book moves on to look at various aspects of dinosaur biology and behaviour. This includes a comparison between the largest and smallest. Here you see the highest, the longest and the heaviest dinosaurs. The reader is also treated to a look at some of the smallest dinosaurs, although oddly, they are only depicted to scale with the largest. As such, they are reduced to indistinct grey blobs.

That’s Micropachycephalosaurus (1), Compsognathus (2) and Lesothosaurus (3), in case you were wondering.

The giants are, naturally, painted in rather more detail. The Diplodocus and Brachiosaurus are fairly generic efforts for the time, even if the Diplodocus has a peculiarly short tail. The Barosaurus, however, is quite something else entirely. It’s another ‘freaky giraffoid Barosaurus‘ in the mould of a 1970s illustration by an unknown artist (featured on LITC before) who drew inspiration from an earlier Bakker piece, but failed to realise that Bakker had applied foreshortening to the tail. Said mysterious artist also saw fit to give the animal the physique of a racehorse – quite literally – with colossal muscles and very unsettling bodybuilder veins all over the place. Naturally, Hardy has quite faithfully copied almost every disturbing detail. The result is especially bizarre precisely because it’s contrasted with two rather more ordinary-looking reconstructions of sauropods. At least steroidal Barosaurus is dead…for now.

Another of the book’s spreads showcases various carnivorous dinosaurs. Allosaurus is shown confronting Stegosaurus; the former in classic tripod guise, and the latter with plates that point every which way, just in case. Joining in here is Deinonychus, one of the few clues that this book was produced after 1960. Its right leg is rather awkwardly positioned, and the mega-wrinkly look is a little weird, but it’s by no means the worst I’ve ever seen. Far, far from it…

On the other hand, this might just be the worst depiction of this animal that I’ve seen. Yes, it’s that Lystrosaurus! One can imagine a whole herd of these piling towards Serious Sam, roaring and grunting as they are cut down by magic revolver fire. What a magnificent beast. Placodus is just envious.

Almost as bad is this Smilodon, which manages to have at least three elbows. Quite a feat, even if our old friend Megatherium doesn’t appear to be too impressed. Messing up dinosaurs is one thing, but, come on mate, it’s a cat. Even in 1990, one didn’t have to go much further than the local library to find plentiful images of lions.

I couldn’t leave it there, though. For, much as minor anatomical peculiarities might irritate you, they aren’t going to give you nightmares. Behold the crawling horror, the moist, wheezing abomination that crawls out from under your bed at night, edging ever closer towards the tender soft parts of your face.