Having covered this book’s theropods in a previous post, I suppose it’s time we give those Other Dinosaurs a quick look.  I still think it’s a real shame that this series wasn’t published more widely; the illustrations are consistently excellent and serve as a wonderful reminder of where we were at in the late ’90s. This was the work of some of the best palaeo-illustrators around, and it’s never made more clear than when they apply the same care, attention and flair to a ‘boring’ ornithischian as a sexy sexy theropod. 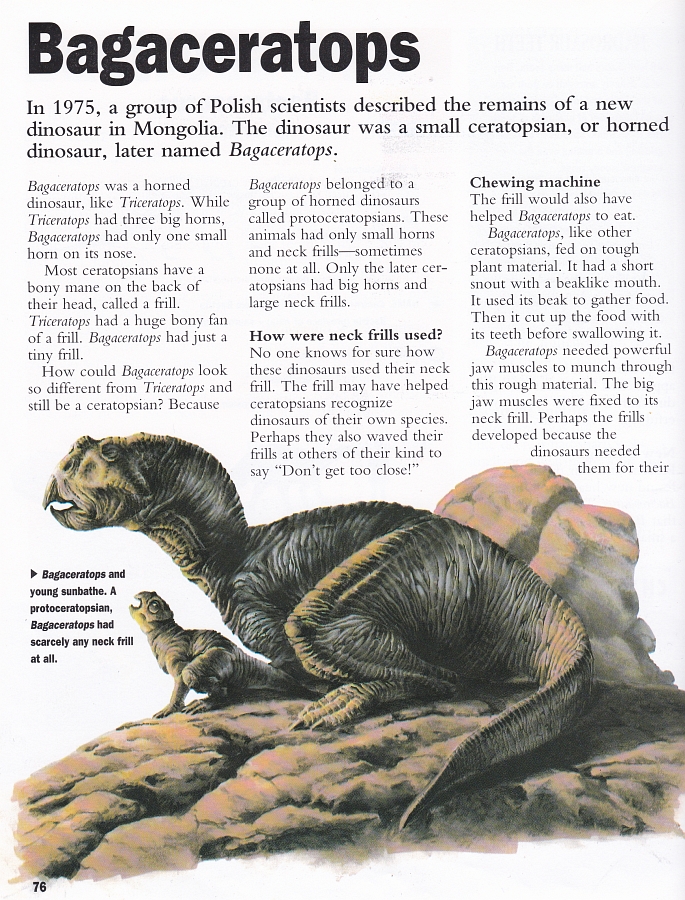 One of the first non-theropods to appear in this volume of Dinosaurs of the World (after Bactrosaurus, which is represented by Sibbick’s Normanpedia reconstruction) is Bagaceratops, as illustrated by Steve White. As with the Ceratosaurus in the last post, there’s a distinct Gurche flavour to this piece. It’s all in that slightly peculiar skin texture, which seems to consist of a series of deep grooves and wrinkles not unlike an elephant. Admittedly, this was quite a common trope at the time, as seen in the work of Gurche and Sibbick, some of the Jurassic Park dinosaurs, and various dinosaur toys (such as my childhood UKRD figures). The very brown colour palette does, once again, add to the Gurcheness of this piece; it reminds me of that National Geographic cover that Darren Naish isn’t allowed to show people. It’s still beautifully painted, of course, especially in terms of light ‘n’ shade, and I love the inclusion of the juvenile (with appropriately juvenile proportions and facial features). 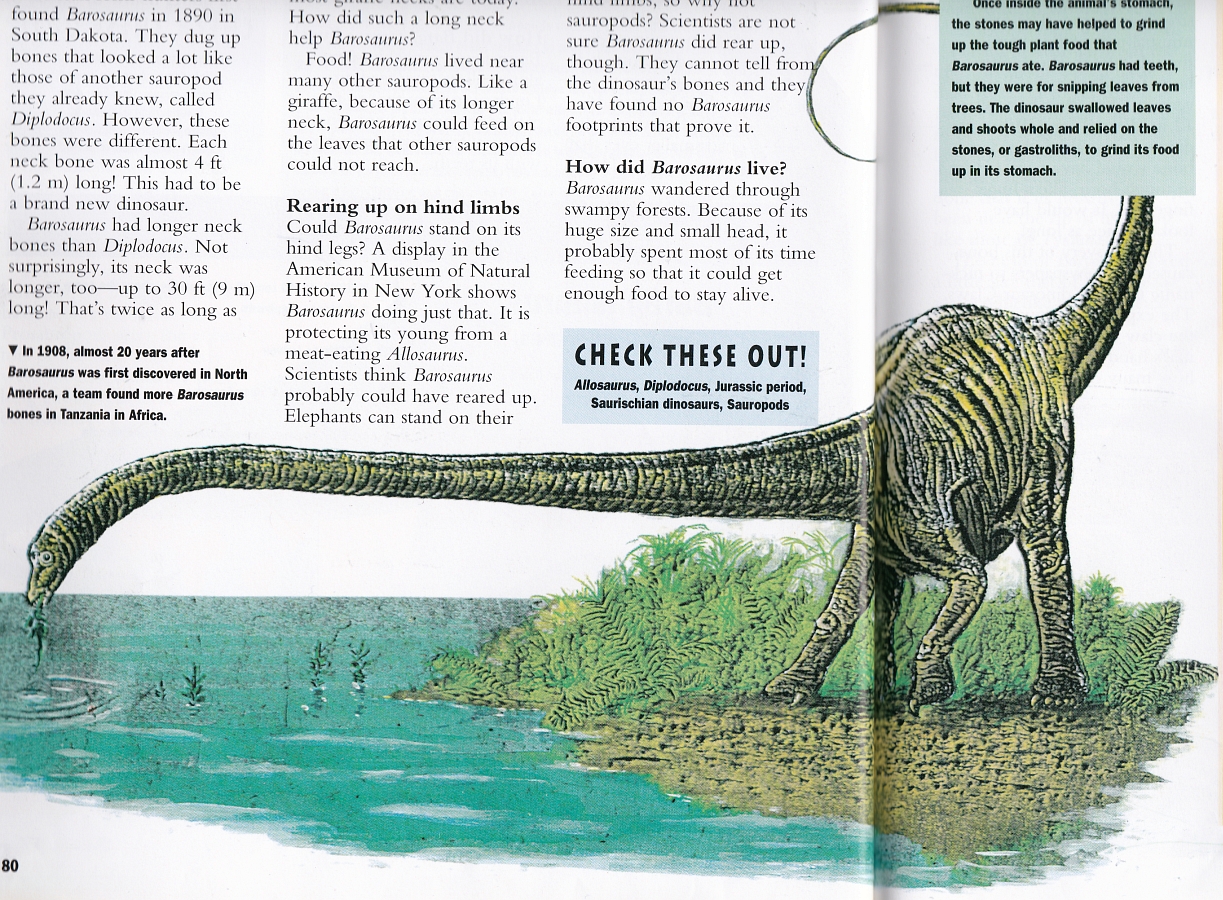 Further super-groovy skin textures can be observed in this Barosaurus by Arril Johnson, which is also peculiarly skinny to an extent seldom seen in reconstructions of sauropods (although it’s not half as bad as that one you’re now thinking of). Granted, the perspective does diminish the body somewhat, and a good chunk of the animal’s torso has disappeared into the page fold, which is a shame (and an issue shared with a few illustrations in this book). Points must be awarded for only sticking a single claw on each hand, though – nicely observant on the part of the artist, and something that people still get wrong far too often. I hadn’t heard of Johnson prior to reading this book; a quick Google search revealed a University of the West of England (UWE) lecturer and artist of the same name, who I didn’t think was necessarily the same person until I found this Segnosaurus illustration on his personal website. Even if he’s not the artist of the above piece, a cursory Google search has led me to a wealth of wonderful palaeoart that I wasn’t previously aware of – I might just have to try contacting him.

As we saw last time, Dinosaurs of the World doesn’t just stick to dinosaur genera, arranged alphabetically – it also concerns itself with larger clades of dinosaurs, the dinosaurs’ Mesozoic contemporaries (including fish!), and aspects of their anatomy. Hence, we get four pages dedicated to BONES! Lovely, lovely bones. The Scelidosaurus skeletal diagram shown above was drawn by Jim Robins, who’s produced plenty of excellent cutaway dino-diagrams for other publications. For the time, this is an excellent skeletal, and it’s admirable that Jim didn’t skimp on any detail just because this is a book for the kidz – the level of fidelity makes it a truly beautiful thing to look at and ponder over. And I bet drawing on all those scutes was an absolute bitch. Brilliant work, just the sort of thing I’d love to have a t-shirt of. 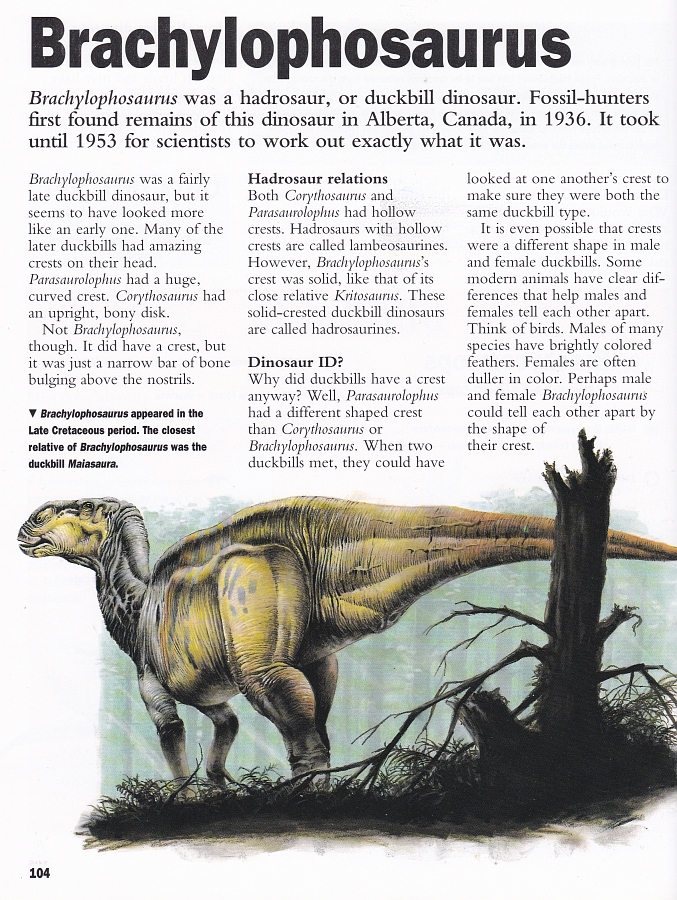 Moving back to fleshed-out dinosaurs, and here’s Brachylophosaurus. Just another boring old hadrosaur, right? Better throw in a tooth-gnashing, beady-eyed tyrannosaur bearing down on its neck with a look of sadistic glee plastered on its ugly face. Now, Steve White might be a little prone to that sort of thing – he’s the ‘baby killer’ after all – but in this case, he does a very nice job of drawing a hadrosaur just, you know, standing around. Use of perspective is key when making a ‘diagnostic’ illustration of a dinosaur interesting, and so it is here. The viewer is close to the ground, separated by stripped foliage from the dinosaur, which while facing away, has also turned its head to the side as if to observe us. The forest background is also a great way to add depth without detracting from the purpose of the illustration, which is to show the animal clearly. More than that, it’s also a very good illustration of the dinosaur, especially for the time – and while suitably creased and gnarly-looking in places, doesn’t have the same degree of Gurche-like wrinkliness seen in the Bagaceratops. 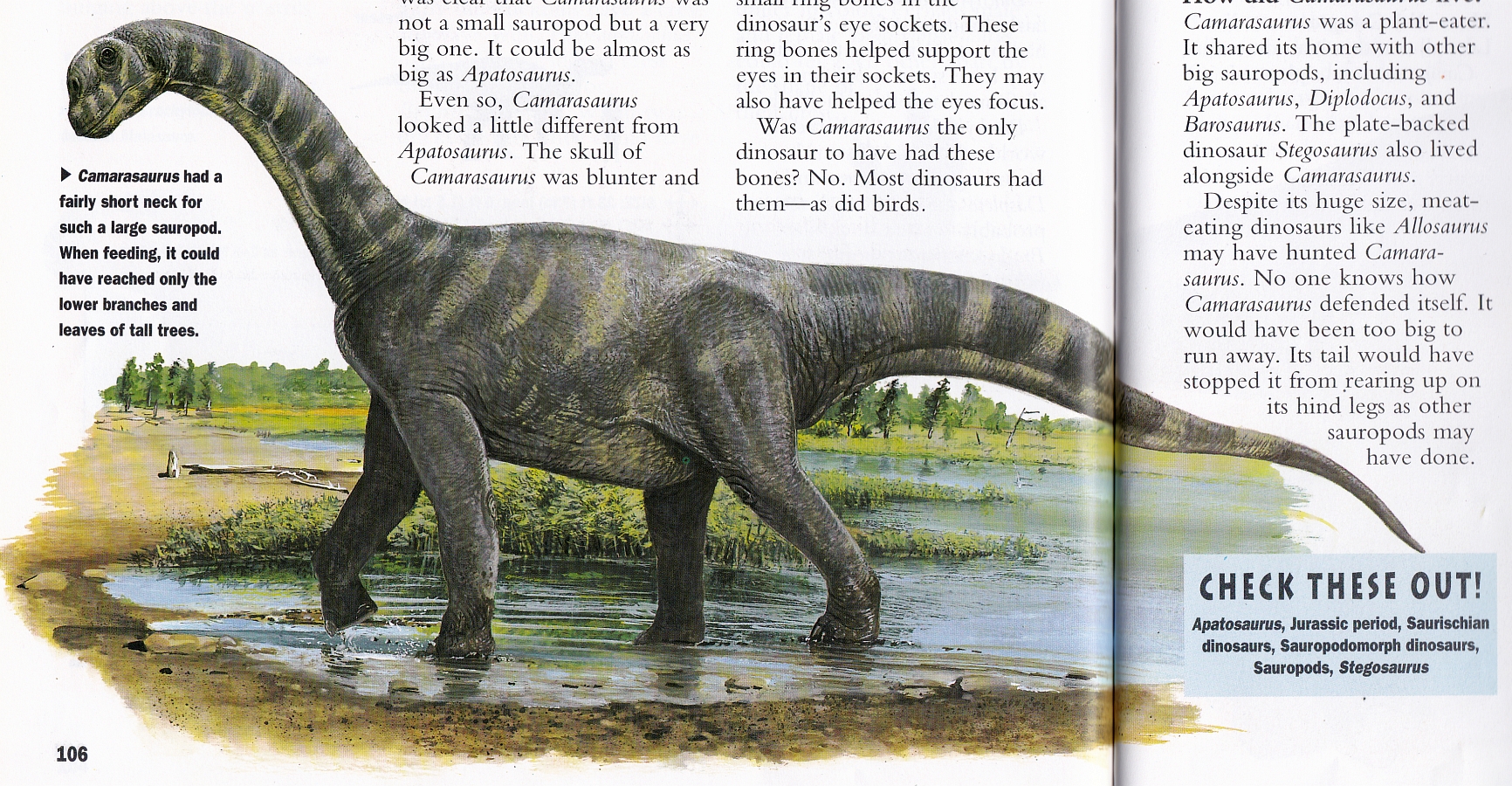 As I mentioned previously, there is a tendency for important chunks of illustrations to get sucked into the fold in this book, and nowhere is this more upsetting than in the case of Steve Kirk’s Brachiosaurus, an excellent but (alas) very tall and narrow illustration that threatens to disappear completely. As such, I’m regrettably not featuring it here, but at least we have a couple of his other sauropods to fall back on, including this Camarasaurus. It’s ostensibly a simple illustration of an animal walking along the shores of a lake, but Kirk pays close attention to the animal’s anatomy and includes countless subtle details that add up to a very believable reconstruction, even without aiming to be ‘photo-realistic’. The animal seems to have curiously dipped its head to observe us with its glassy eye. I can almost picture myself standing there. 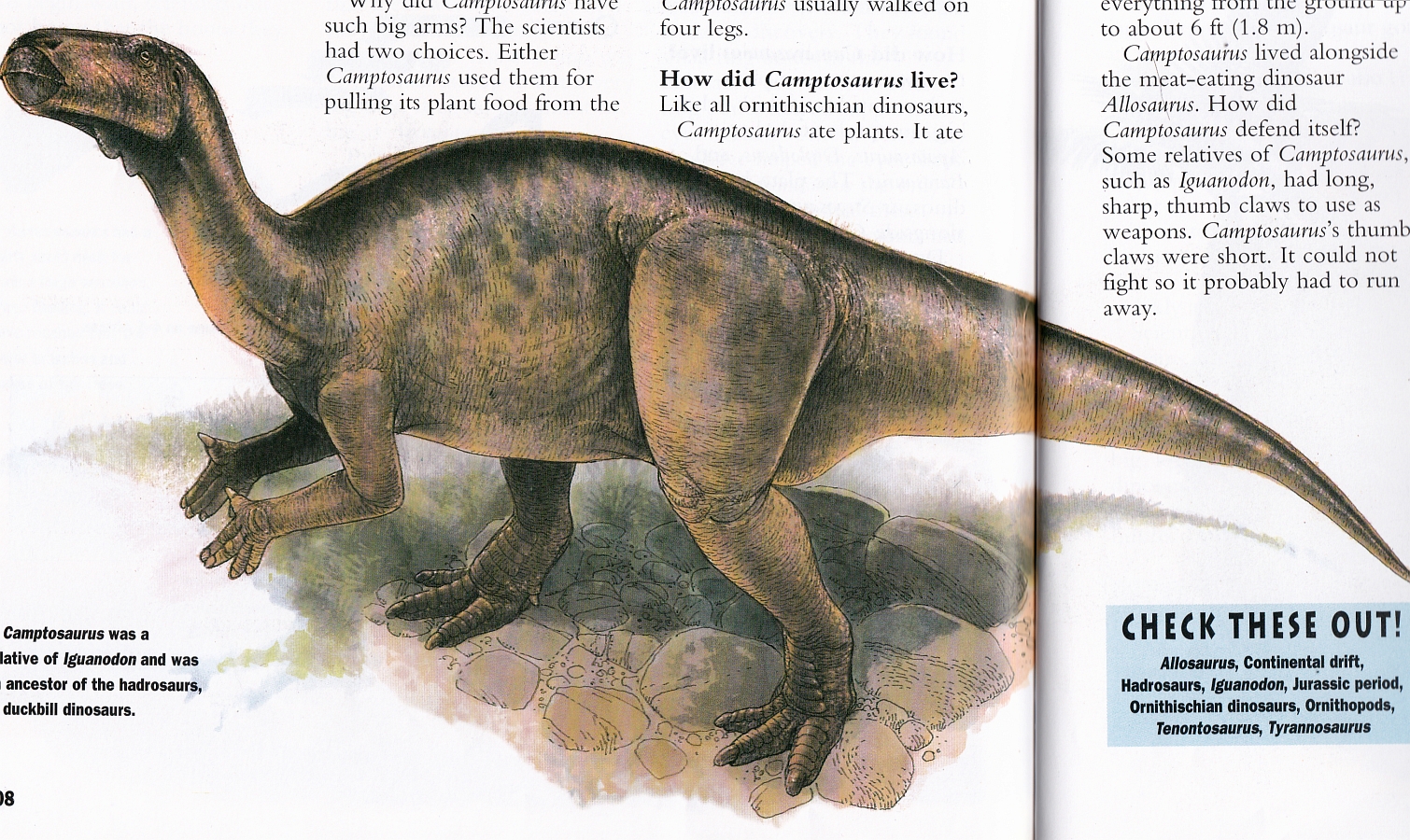 In fact, it’s amazing how much interest a bit of head-tilting can add to a piece. It’d be very easy to make a ‘spotter’s guide’-style illustration of Camptosaurus a very boring affair indeed, but Jim Robins has done a wonderful job here, and a lot of that’s down to the unusual perspective and the pose of the animal. Although it’s standing still, the animal’s curiously cocked head and widely-spaced limbs are suggestive of an alertness and energy. Yes, in some respects it’s a very sleek, Paulian, ’90s reconstruction, but it’s still very convincing as a real creature, rather than an artificial wrapping around a skeletal diagram. It’s also commendable that the hands (as in many of Jim’s reconstructions of the time) are facing palm-in; it happens far too often to be coincidental, and shows how in tune he was with these animals’ anatomy. 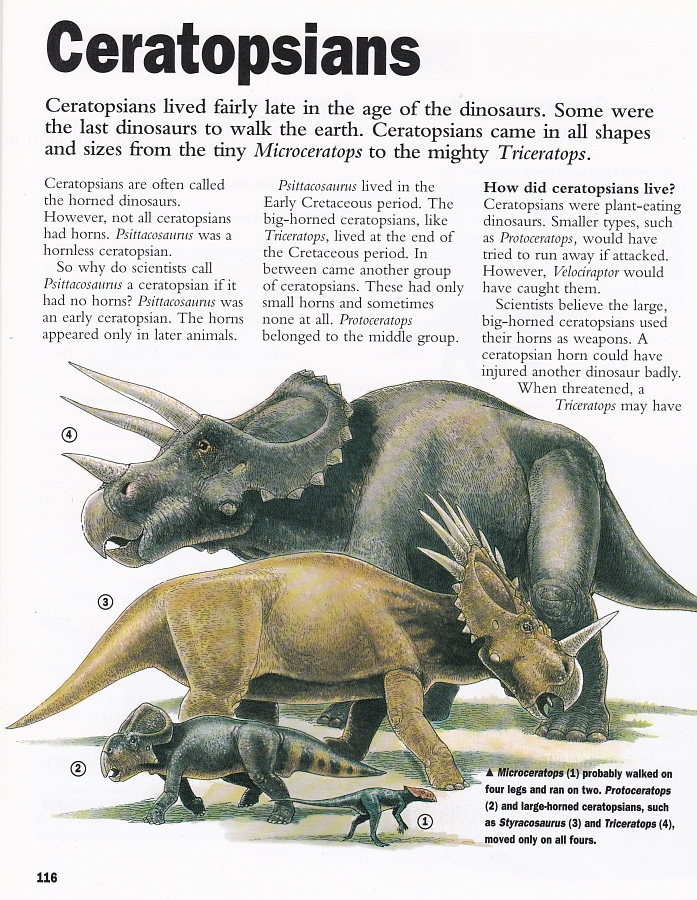 More Jim Robins, and this time it’s a gathering of ceratopsians. It’s yet more lovely work, and the animals have a convincing heft and bulk in spite of their more Paulian attributes. The Triceratops looks to have been based on T. prorsus, but I still can’t help but wonder if the angle of its neck frill is a bit shallow. Within the realms of individual variation, I guess. Fans of preoccupied generic names will note the inclusion of Microceratus. It’s interesting to note that Jim drew his ceratopsians with rather elephantine feet here, which was very common at the time (and remains so in the work of people who copy older reconstructions), while Steve White chose to depict Chasmosaurus as having clearly separated digits (see below). One can only speculate…

Before we get to said Chasmosaurus, here’s another Steve Kirk sauropod for your consideration. This time, it’s Cetiosaurus, an early sauropod from that country what where I’m from. It doesn’t get a lot of love in popular media these days, probably because, as an early sauropod, it’s a bit too ‘generic’. It’s not especially huge, nor does it have very many weird features. Invicta did produce a toy back in the day, but you’d be hard pressed to find a model Cetiosaurus these days (it seems that Collecta made one in their early days, but it’s predictably not very good). It’s a shame, as this is a genus with an interesting palaeontological history. It’s also always interesting to see reconstructions of dinosaurs from one’s own home country, not for any nationalistic reasons, but because it’s a very immediate link to the prehistoric past. And we can’t let Baryonyx hog the limelight.

I should probably talk about the artwork, though. It’s another lovely piece, although I think I prefer the poise of the Camarasaurus. Note that Kirk correctly portrays the animal as having long forelimbs for a sauropod (not in the brachiosaur ballpark, but still long proportionately). It’s very brown, which is a bit of a shame, but suitably bulky and the background’s beautiful once again. 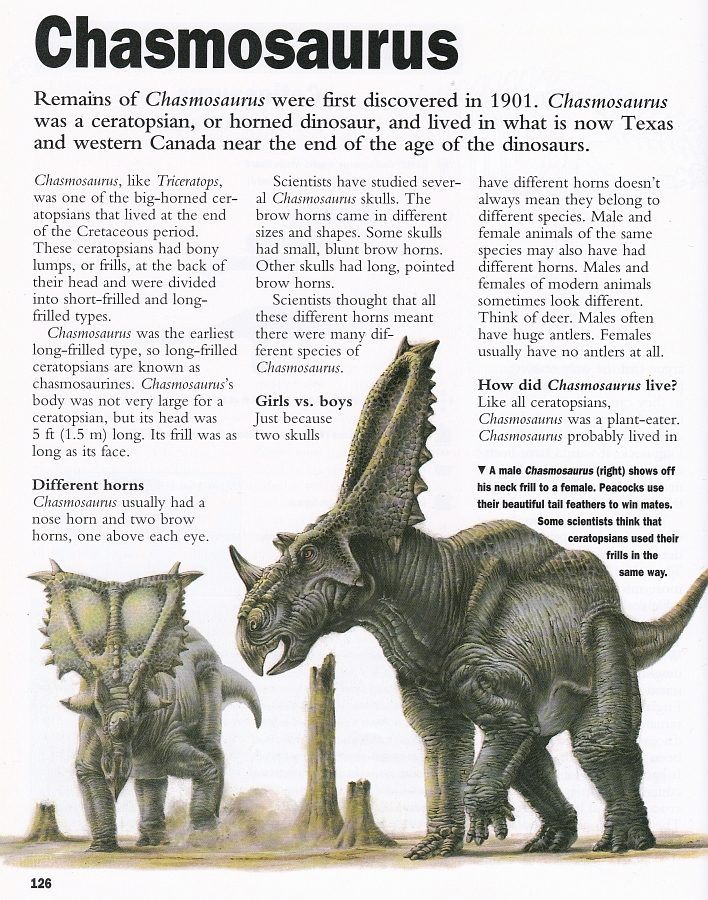 And finally…that dinosaur that everyone seems to think this blog’s named after. (But it’s chasmosaurs, see?) The wrinkly skin texture here is rather like that of the Bagaceratops, but apart from that, there’s so much to admire here for a piece from the late ’90s. The hands are right, the forelimbs are slightly bowed, and the tricky perspectives are pulled off expertly. I like that we are presented with two very different views of the head, which is an excellent way for the reader to gauge its overall shape. This is a picture of Chasmosaurus as a striking, imposing, but beautiful beast, and it’s superb.

Next time: another reader submission! But I hope you’ve enjoyed this tantalising glimpse at just one volume of a frustratingly hard-to-find partwork. If you happen to have any more volumes of Dinosaurs of the World knocking about somewhere, PLEASE get in touch! 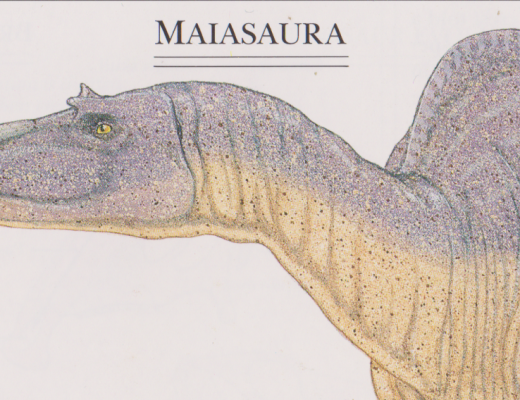 Vintage Dinosaur Art: On the Trail of the Dinosaurs – Part 2