Let’s finish this thing. I know that everyone loves ’90s Sibbick as much as I do, and is never, ever bothered by the ‘Vintage Dinosaur Art’ series featuring art that’s so relatively recent. And let’s not forget that Herman Diaz went to all the trouble to send this one over from the States. Therefore, there surely won’t be any complaints. Surely. Look, here’s a comparatively obscure Iguanodon piece.

The above is one of the few pieces featured in My Favorite Dinosaurs that I hadn’t seen before (stabby insert excluded). It features everyone’s favourite faculatively bidpedal horsey-faced beak-mouthed nasty-thumbed lumbering ornithopod, Iguanodon, roaming across a flood plain while scattering various hypsilophodonts and attracting the attention of an allosaur. I’d hazard a guess that this was produced in the late ’90s or very early 2000s, based on the forelimb postures of the animals and the presence of Neovenator (making another appearance after its starring role last time). It’s rather nice, I think, placing the dinosaurs in a wider context effectively and offering a decent sense of scale. (Iguanodon was a big beast, after all.) The Iguanodon are a bit dull to look at, though – why did Sibbick seemingly have such an aversion to giving the reluctant miner a snazzy colour scheme? Both the Hypsilophodon and Neovenator here are far more striking to look at. It’s very competent, and worthy, but doesn’t quite excite me in the same way as some of the other classic artworks on show here…

…such as this one. This was a Natural History Museum commission, and justly very famous. This is an image familiar from my childhood, and yet I’m still discovering new details in it. For example, I somehow only noticed recently that there are two different types of Maiasaura in this painting, likely intended to represent sexual dimorphism; some have more of a brick red back and pronounced dorsal crest. Entirely speculative, but a lovely touch. More obviously, a reasonably sized (varanid?) lizard is shown with a hatchling in its jaws in the centre (warranting an angry response from one adult Maiasaura), a pleasing detail that I remember inspiring quite a few imitators. There’s more to this image than simply a gaggle of hadrosaurs cooing over their nests, even if that is the primary subject matter (in the NHM, this hangs behind a model Maiasaura nest). There’s a decent variety of behaviours and a great attention to detail on show.

Having touched on a very familiar piece, I must admit that the above work – depicting Apatosaurus trashing the place while Ceratosaurus looks on, very likely aghast – rings bells, but isn’t so instantly recognisable. The sauropods may be a little bland and wrinkly-looking in a very ’90s way, but they are also convincingly massive, combining strong, muscular limbs with an enormous gut, while never appearing to have ‘treetrunk limbs’ as they might have done back in the Normanpedia days. Note, also, that the apatosaurs have fat necks. Perhaps not fat enough, but they nevertheless don’t resemble grotesquely overweight Diplodocus, which is always a plus. The Ceratosaurus, too, is very well drawn from an exceedingly tricky angle; it’s so easy for artists to accidentally give theropods a rather wide-gauge rear end when depicting them from perspectives like this. I also like the overall composition of the scene, and the impression that we could be another Ceratosaurus, standing directly behind, surveying this terrible mess.

That insert T. rex thing is weird, though. Not quite sure why they felt then need to include that. You’re ruining the scene!

Now here’s a bona fide classic, another NHM commission from the early ’90s that, somehow, manages to make hadrosaurs seem exciting. I know, the absurdity of it! There’s an awful lot going on in this scene, and it’s highly enjoyable just to pore over the details. A lot of the animals seem content to relax in a fashion that reminds me a great deal of modern birds and mammals, the Corythosaurus in the foreground in particular. Others are more active, some engaging in social behaviours with conspecifics (such as the differently aged Parasaurolophus in the centre), while a Lambeosaurus pair (male and female? Note their subtle differences) splash around in the water, perhaps bathing. There’s obviously an emphasis here on the diversity of hadrosaurs, but even within the same species different ages and morphs are featured, with interesting speculative details. The Parasaurolophus are an especially intriguing case, as there appears to be a mix of P. walkeri (or perhaps P. tubicen?) and P. cyrtocristatus, the two appearing very similar but for more vibrant patterning and a more prominent dorsal crest on P. tubicen/walkeri. It’s likely that Sibbick was following the hypothesis that they were actually the male and female forms of the same species. It’s an idea that’s certainly found some favour in the past, but seems to have been left by the wayside these days (not without good reason, I’m sure).

Regardless of any taxonomic issues, this is a truly spectacular piece, palaeoart that really does seem to offer a glimpse at a long-lost landscape teeming with strange, gigantic life forms, stomping, honking and just flopping their big scaly arses around after gorging on delicious ferns and pine needles all day. It’s easy to miss the tyrannosaur over in the distance, standing like the outlaw in a western movie. Perhaps something’s about to go down. It’s an enjoyable hint of menace. 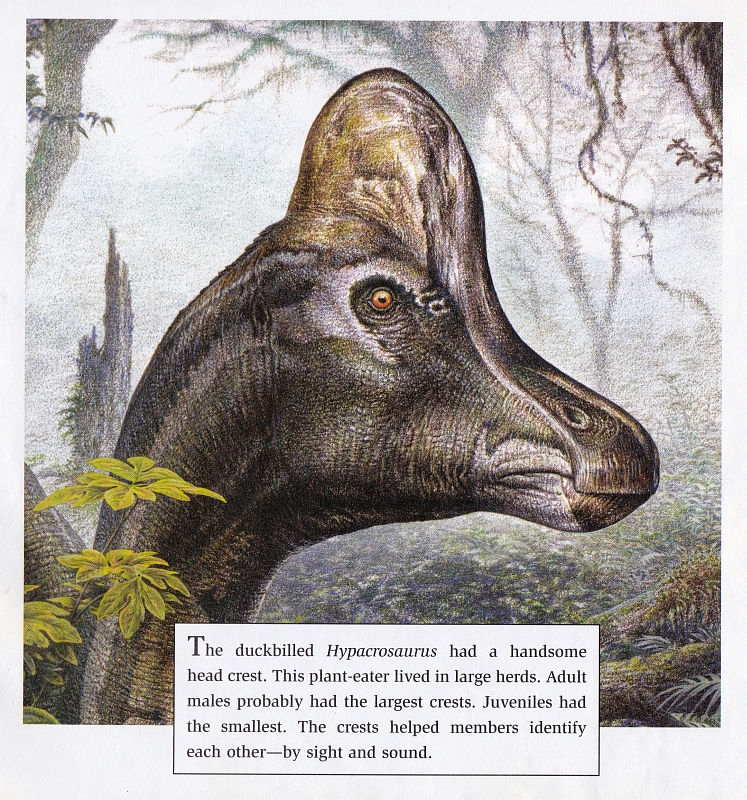 Although My Favorite Dinosaurs is dominated by Sibbick spectaculars starring large numbers of dinosaurs, room is found here and there for more…intimate works, such as this portrait of Hypacrosaurus, which is quite stunning. Quite apart from the stripy green colour scheme – which seems to have been a bit of a mini-meme as far as depictions of this animal went – I like that the keratinous sheath on the animal’s crest appears to have been modeled after a cassowary’s casque. It looks authentic, as does the beast’s slightly mad, uncomprehending stare. I know I’ve said it many times before, but it seems that few artists are able to truly capture that incomprehensible reptilian stare that these animals must have had. Just as with modern birds and reptiles, it’s not that they would have appeared stupid, necessarily; rather, they would have appeared uncanny and ‘other’ from our mammalian point of view. Artists: resist the urge to give your dinosaurs facial expressions. 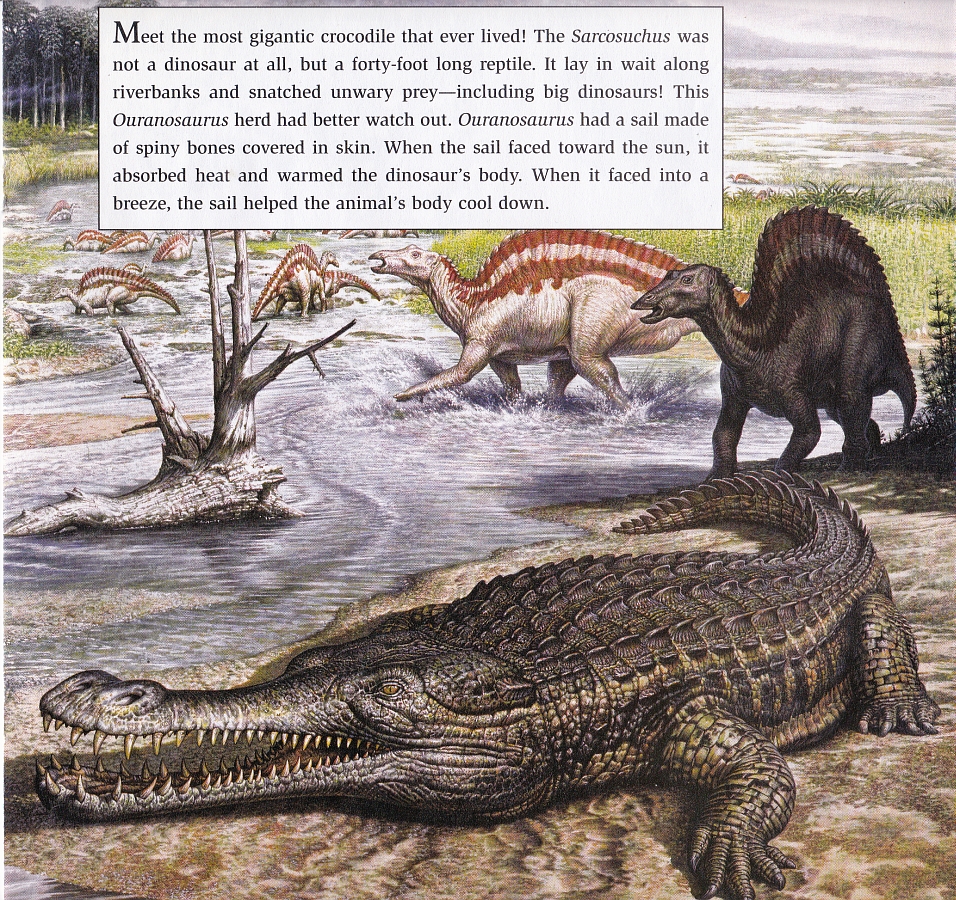 The book skirts from Hypacrosaurus to Ouranosaurus, or rather, Sarcosuchus, as Ouranosaurus is relegated to the background of the above piece. I originally saw this painting in The Ultimate Dinosaur Book, a very shiny Dorling Kindersley coffee table book published back in the early ’90s, before DK trashed their reputation with a load of CG dross. It impressed me then, and it still does. Just look at the tightly-packed scalation on that not-quite-a-crocodile…beautiful. (Note, also, that author Ruth Ashby avoids referring to Sarcosuchus as a crocodile. Very good.)

Ouranosaurus, meanwhile, is definitely there and, you know, splashing around and looking alarmed and whatnot. And using its sail as a solar panel or whatever. But not one upstages Sarcosuchus.

And finally…this Polacanthus, a private commission that was produced with the assistance of Steve Hutt. It’s really rather nice and, when compared with the classic (frequently copied) Normanpedia incarnation, reflects a more modern understanding of the animal’s life appearance. Those spines could have your eye out. (If you’re wondering about the stegosaurs, they’ve been on the blog before.) The background of this piece is stunning, too. Damn it, all this praise is making me feel a bit ill. I’m breaking out in a rash. Someone find me some trashy art thrown together by someone in a drunken stupor 30 years ago in order to pay the mortgage, quickly!

Nah. I’m very happy to have finally covered such wonderful Sibbickness on the blog; it’s well overdue. Thanks again to Herman for sending the book over. Next time: something completely different and probably a bit beaten up, based on the apologetic email I received from the seller. Also, I’ll be at TetZooCon this weekend, so here’s hoping I see a few of you there.