I’m really not sure how this one managed to evade my attention for so long, but here it is, finally – Prehistoric Animals: The Extraordinary Story of Life before Man, written by Ellis Owen and published by Octopus in 1975. It’s unusual in that the palaeoart within it consists almost entirely of photographs of models, many of them created by the renowned Arthur Hayward, who worked not only for the Natural History Museum in London (then the British Museum (Natural History bit)) but even Ray Harryhausen himself for a time (albeit uncredited). Hayward was thus responsible both for museum dioramas and the titular time-displaced theropod in The Valley of Gwangi. Plenty of the sculpts featured in Prehistoric Animals certainly have a very familiar look to them, with echoes of One Million Years BC and the NHM-sanctioned Invicta toy line. You might find it surprising, therefore, that Hayward’s work isn’t featured on the dust jacket… 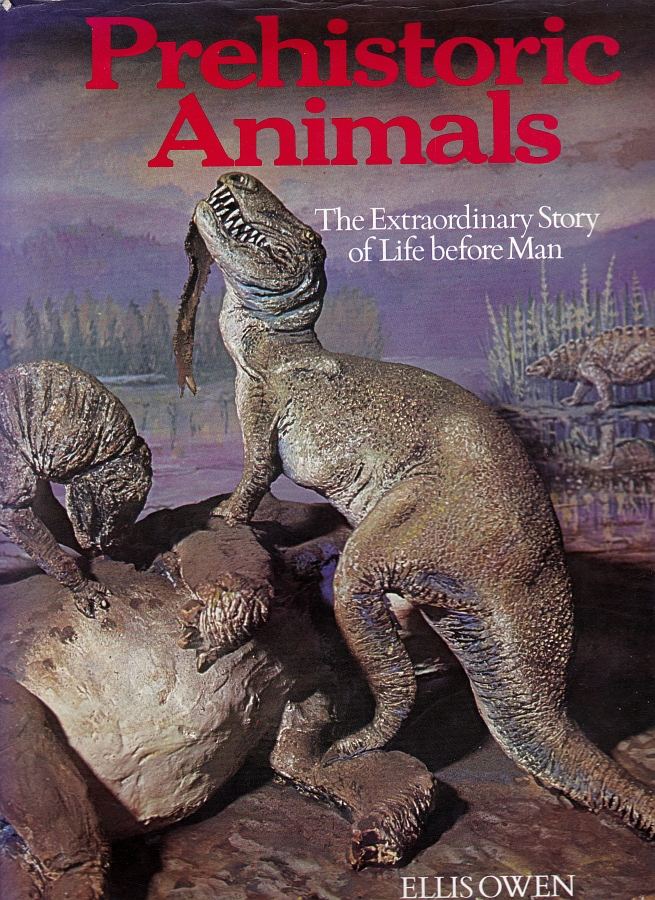 …Instead, it’s a photograph of two wee model allosaurs tearing into a sauropod carcass, credited to the Horniman Museum in London of all places. To be fair, the Horniman does (rather unexpectedly) have a few retro dinosaur models on show – or at least it did when I visited three years ago – although more elaborate dioramas like this are sadly nowhere to be seen. It’s a shame that the artist themself isn’t credited; this is a beautifully crafted little scene, and the lovingly painted background (complete with commendably lush vegetation, varied topography, and an ankylosaury thing wandering past) is especially superb. The same photo reappears inside the book, complete with a caption from Owen:

“Scenes of carnage, much as the one shown in this diorama, must have occurred quite frequently in Upper Jurassic times. Allosaurs are shown here, tearing the flesh of a freshly killed herbivorous giant, probably a Brontosaurus or related form. The presence of fierce carnivorous species must have contributed very considerably to the extinction of the larger herbivores.”

Yes, Owen does seem to be of the ‘sauropods were useless’ school of dinosaur science here, sticking firm to the view that they were bloated lummoxes that lounged around in pools all day, hoovering up water weeds. And this is in spite of the fact that the reconstructions of sauropods that appear in this book have them roving around on dry land…

…Like this one. This Apatosaurus, sculpted by Hayward, looks remarkably similar to the Apatosaurus and Diplodocus from the aforementioned Invicta toy line, which is definitely not a coincidence. If anything, it looks more like the Diplodocus (except for the tail) than the notably tubbier Apatosaurus, right down to specific skin folds on the neck and belly. It makes me wonder if Hayward revisited and tweaked his old designs when sculpting the Invicta sauropods (or perhaps, when sculpting this). In any case, this model is obviously very retro in many respects, from the dragging tail to the flattened, elephantine feet that don’t really reflect sauropod anatomy. It’s also extremely wrinkled, as was the style at the time. In other respects, though, it has stood the test of time as an impressive work of art. There’s a huge amount of fine detailing here, from the aforementioned skin folds, to the carefully sculpted musculature on the limbs, and the sharp, delicate-looking lines on the tiny head. Very nice. It also is notable that it’s striding around on dry land, without a sex lake in sight. Owen doesn’t sound too happy about this, but then he was writing in 1975. 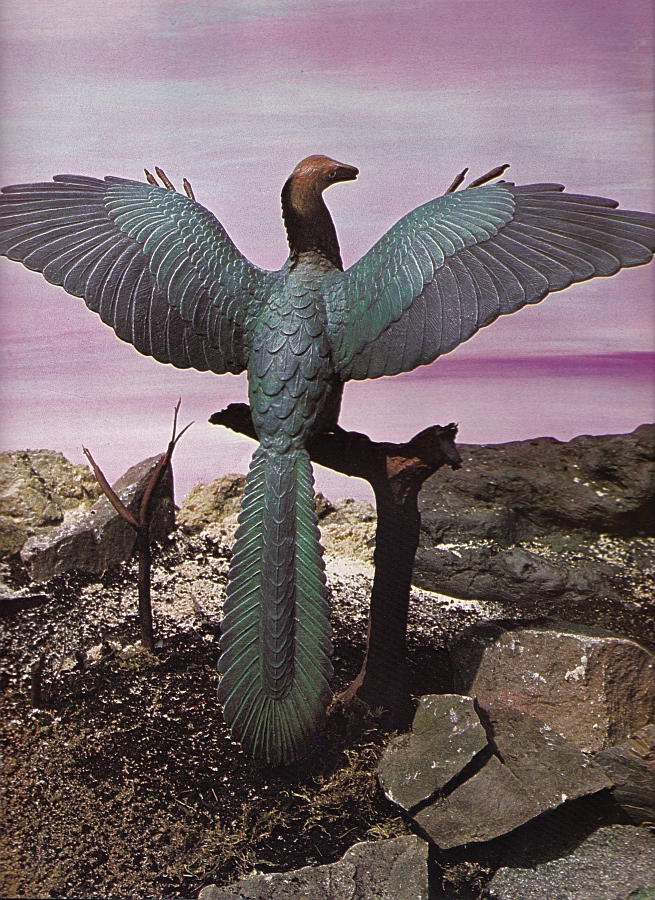 Howard is also credited for this Archaeopteryx, which although beautifully made, does suffer from that typical problem with its hands (in that, they seem to be somehow detached from the wings). It’s also yet another Archaeopteryx depicted with its wings spread wide, just to make it very clear that it does, indeed, have fully feathered wings (although this might have been demanded by the NHM or a client). Something that’s only just occurred to me after all these years is that many Archaeopteryx reconstructions (not just this one) have feathers on their bodies resembling overlapping scales, like fish scales – it seems to be a bit of a trope, although now I’m wondering if there’s a sound basis for it. In any case, I do like the nicely subtle green-blue colouration of this one. A pretty good 1970s Archaeopteryx as they go.

Other Jurassic dinosaurs featured here include these two – the Ceratosaurus is, predictably enough, credited to Hayward, but the Stegosaurus pair are instead attributed to “G. Kinns”. Any readers who are able to help with that one, please do. The former appears to be a model that was also used in a short stop-motion film in the 1960s, where it was depicted chowing down on a bloody carcass, as shown here. It’s very decent for the time, with suitably huge thighs and muscular shoulders, although the small horns in front of its eyes are rather smoothed over. The stegosaurs look very much like they’re modeled on Marsh’s early skeletal reconstruction, and also very much like the Invicta toy, yet again. I wouldn’t be surprised if the same sculptor was responsible. Owen notes that “by mammalian standards none of the larger dinosaurs could be described as attractive animals, but one of the oddest looking members of this group must surely have been the Stegosaurus“. WELL, I NEVER. You can take your mammalian standards and leave, sir.

It’s not all flesh-rending and ugly hunchbacks, of course – come the Cretaceous, we’re treated to these two hatchling Protoceratops. How adorable, and almost certainly more adorable than a synapsid that just emerged from an egg. This photo is only credited to the Natural History Museum (or rather the British Museum (Natural History bit)), with no sculptor named – shame. It also makes me wonder if it was once on display there – if so, I hope it’s been filed away somewhere, rather than disposed of. I know they do have a lot of stuff squirreled away that’s scientifically obsolete and occasionally rather embarrassing, and they should dig it out for an exhibition at some point. I’d be there with bells on. But I digress. In spite of a curious lack of gooey bits, this is a highly evocative and superbly sculpted little diorama that really fires the imagination, even today. 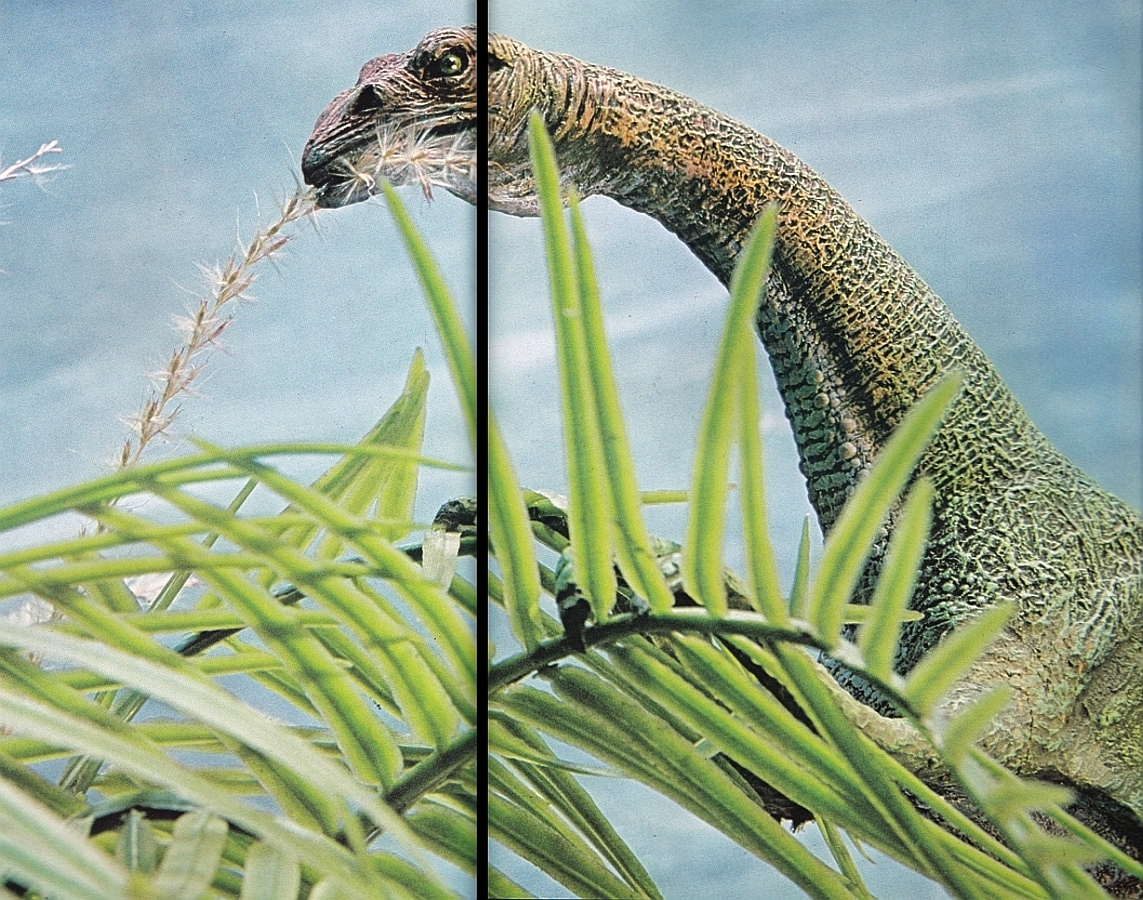 Progressing further into the Cretaceous, we come upon this bizarre beast, which happens to be another Hayward. Given the propensity for artists to depict them as stick-thin, it’s peculiar to see an ornithomimosaur reconstructed with a neck that’s probably rather too thick, but, ah, there it is. This reconstruction is also unusual in not giving the animal a keratinous sheath on its mouth, covering the beak it almost certainly had. No wonder it looks angry. On the other hand, I’m grateful that Hayward restored the creature with well-proportioned hands and fingers, given the number of 1970s dinosaur books that featured ostrich-o-saurs with troublingly shrunken humanoid arms and Trumpian hands. It’s Struthiomimus, by the way.

Cometh the hour, cometh the ceratopsian. Here’s Styracosaurus, again restored with a very minimal beak. Being a lower-specification Styracosaurus, this one does without a neck frill, instead having its signature spiky adornments directly adjoining the front portion of its skull. But we can blame Burian for that one, probably. This utterly charming fellow is highly reminiscent of a similar beast that appeared in The Valley of Gwangi, and may well be based on it, if not exactly that specimen. In spite of its obvious inaccuracies by modern standards, it still has a wonderfully lifelike quality about it. One can start to imagine the personality of this creature by looking into its eyes and examining the details of its weather-beaten hide. Now that’s quality sculpting. 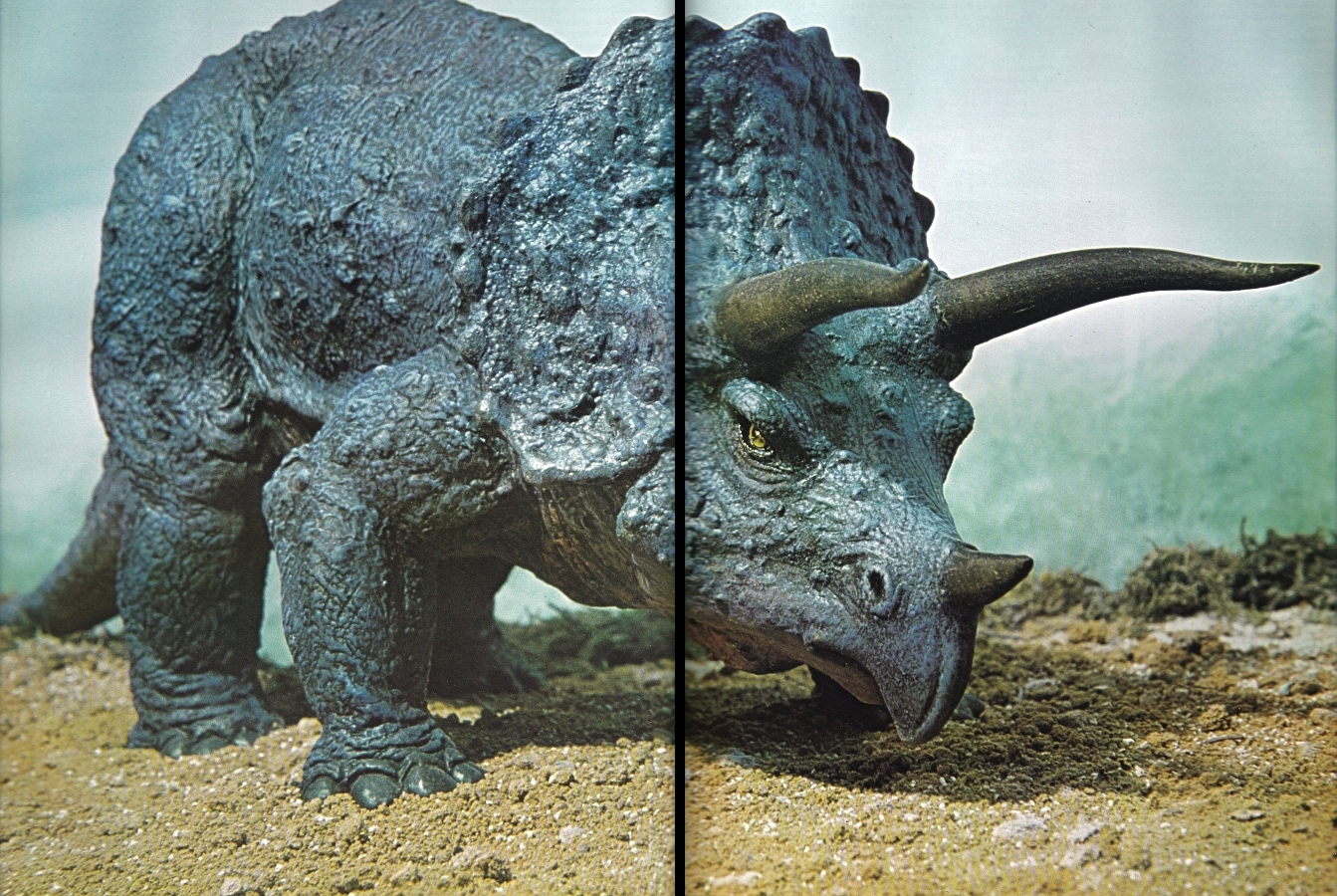 In a similar vein, this Hayward-sculpted Triceratops is a simply magnificent beast (with neck frill included this time). It’s every bit as mean ‘n’ moody as we all (surely?) like to imagine Triceratops being, an overgrown reptilian bull just spoiling for a fight. It helps that, although obviously still dated by modern standards, it’s aged rather better than the Styracosaurus, and its horns are highlighted in a different colour. In fact, the horns in particular are magnificent – they appear dirty, weathered and scratched, but still mostly smooth, as if covered in keratin as one would expect. There’s a tendency in art to give Triceratops cracked up, ‘fossilised’ horns (but we can blame Jurassic Park for that one, probably). That warty, lumpen skin texture is also magnificent. It looks rather like the Triceratops from One Million Years BC, and may well be a copy, although I prefer the blue colour and beady, yellow eyes of this one. Wonderful stuff.

Prehistoric Animals will return! There are fish. A surprising number of fish. Dr Naish would approve.