I’m going to show you some more of Dinosaurs! The Multimedia Encyclopedia. Since I shared the first part last week, there has been no shortage of you guys telling me about the dinosaur computer progams and games you used to have back when CD-Rom was a thing. Unsurpisingly, there were far more dinosaur-centered computer programs and video games around at that time (1993 – the year of Jurassic Park), many of which might be worth looking into someday… if any modern computer will ever run them! 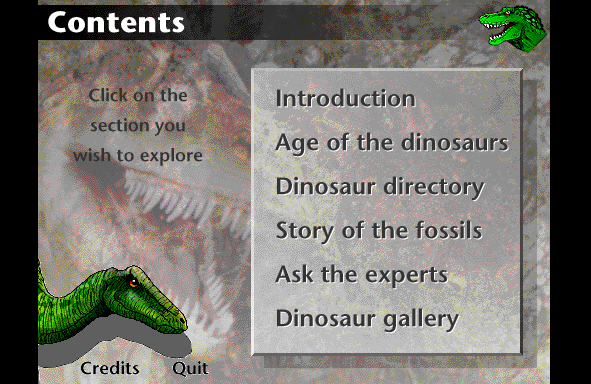 I thought I’d show you the program’s main menu, to give you an idea what features it had and what the general design looked like. From what I remember, the “Introduction” was a narrated slide show, “Age of the Dinosaurs” gave some information about geology and taxonomy while “Story of the Fossils” talked about the usual suspects from the history of palaeontology. “Ask the Experts” was particularly interesting, as it contained video interviews with palaeontologists Dan Chure and Dr. Angela Milner, the latter of whom is the head vertebrate palaeontologist at the NHM and most famous for co-authoring the description of Baryonyx. They also got Milner to narrate, which is cool. 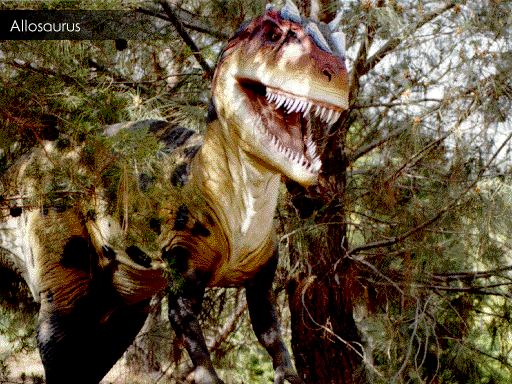 The main menu has the animatronic Allosaurus from Dinamation in the background, which Marc hates but someone on the dev team must have really taken to, because they put it on the box art and basically made it the program’s mascot!

As I’ve said, the most interesting aspect about this particular relic from the early nineties are the many unique illustrations that were produced for the Dinosaur Directory. The credited artist, Valerie Bennett, is proving completely ungooglable, so I have no idea what her background was. I like to imagine she was a friend of the devs who happened to be a decent illustrator and drew up some dinosaurs as a favour, and in the process created a strange, unique, unorthodox but internally consistent, fully realized Mesozoic dinosaur menagerie all her own, despite not technically being a palaeoartist. All things considered, it’s not a bad achievement! I do hope they paid her, as she made over sixty of them! 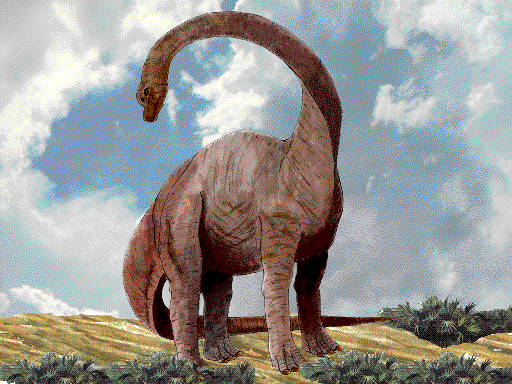 Most of the sauropods Bennett illustrates are of the “greyish wrinkly elephant” type, which means many of them look interchangable. Here, for instance, there isn’t much to indicate that we’re looking at Barapasaurus – a very early, smallish and basal one. It could be any old sauropod; it actually looks large and impressive. With some tweaks it would make a perfectly cromulent ’90s brachiosaur or titanosaur. I like the neck pose, but the dragging tail lets the side down. 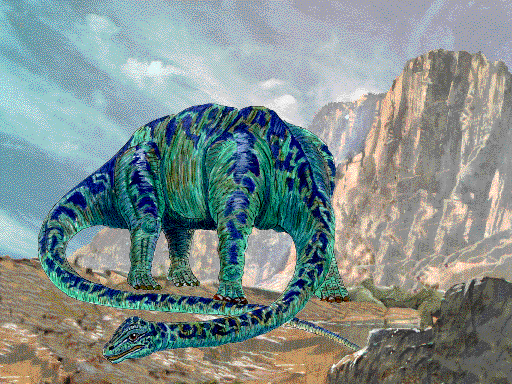 This is an exception. This sylish blue-and-turquoise getup belongs to Euhelopus, an unusual and pretty rad Chinese titanosaur that’s been known for a long time but rarely makes an appearance in pop culture. Unfortunately it’s one of the lesser Bennett illustrations otherwise, quite hokey and just “off”. Of course, with so many sauropods and so little to differentiate them, Bennett just went hog-wild with the different poses and made this one bow its head in shame. 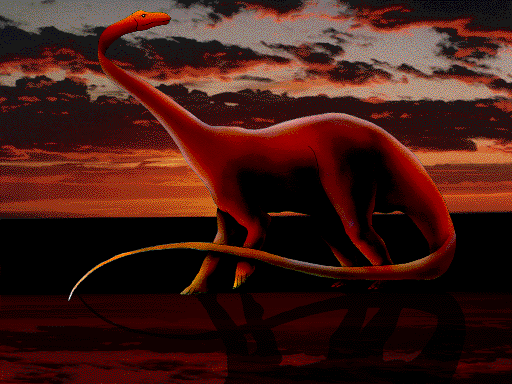 Diplodocus, on the other hand, has been given a gorgeous and minimalistic portrait at sunset. It’s amazing how much some dramatic lighting can add, and it actually looks very distinctly diplodocian! The point I made last time seems to stand: Bennett seems to do better if there’s actual mounted skeletons on hand in London. 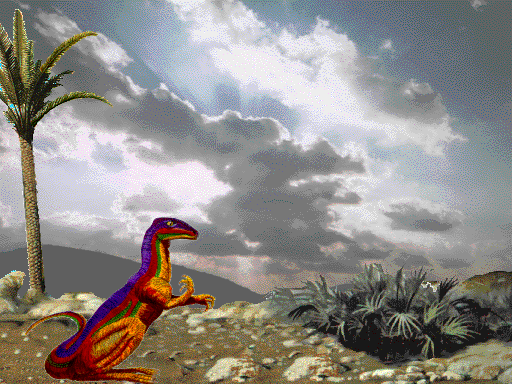 Let’s talk about Fabrosaurus. The Triassic African critter occasionally appeared in books as an early ornithischian – which it may or may not actually be – and I think it had an odd tendency to be quite flamboyantly coloured? Was that a bit of a trope? I think I’ve seen more, but they were never quite as fabulous as this! I know what’s going to be my next Pride mascot. 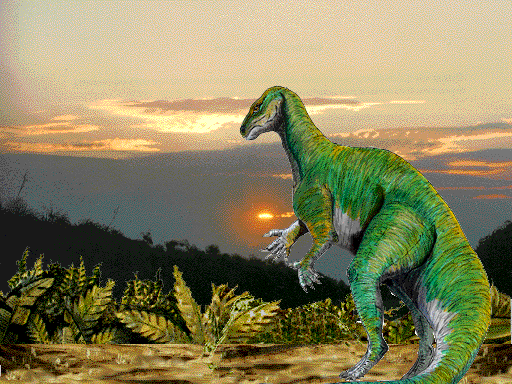 In another vaguely tropey vein, I’m sure I’ve seen Camptosaurus in this exact pose, with its human-like hands held like that, but from a different angle. Might have been in Dinosaurs! Magazine. I think it’s based on Sibbick’s Iguanodon for the Normanpedia, which I’m pretty sure is a book that could be found on one of the dev’s desks. 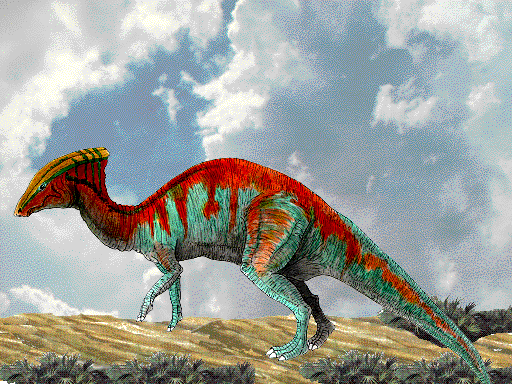 I like this Parasaurolophus. It’s a full-on quadruped rather than the Gangly Dorks that hadn’t quite died out by this time, and it’s been given an implausible but beautiful (some would say tacky) Valerie Bennett ™ colour scheme. What happened to the skin flap Para used to have between its crest and its neck? They were often depicted with one, from Fantasia to the first Jurassic Park, but it’s been declared unlikely that they actually had that. 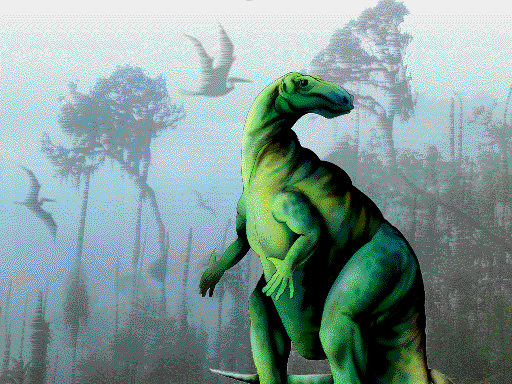 Oh yeah! Spiky McStabbythumbs was my favourite dinosaur as a kid and this was my favourite illustration! It has a unique and cool background even! However, this image aged quite poorly, based on Dollo’s outdated reconstructions and oddy… corpulent? I mean, I’m not here to bodyshame anyone of course, but that’s a lot of Iguanodon right there. It shall be named Spiky Thiccboi. 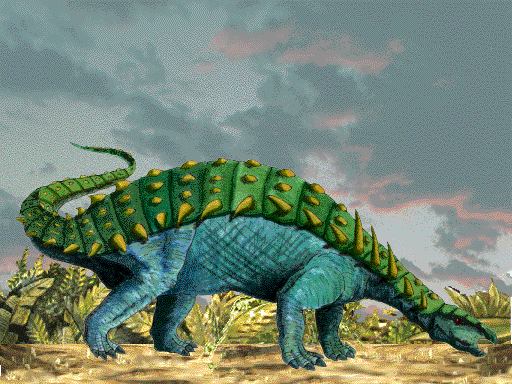 This Sauropelta was always one of my favourite illustrations of Bennett’s, and it still looks pretty convincing today, even if Sauropelta had WAY bigger spikes than that. Oddly, in the EXREME nineties most illustrators would often tone down many dinosaurs’ more extravagant features. Sauropelta would have been spectacular to behold in real life. 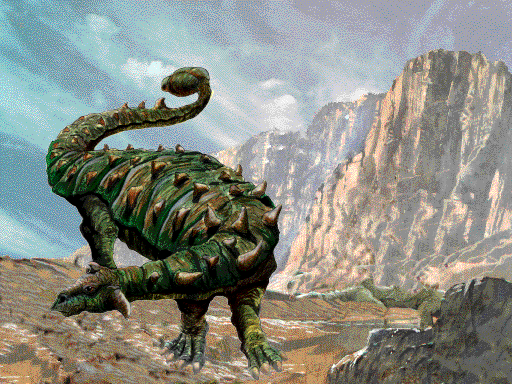 This must be one of the most baffling reconstructions in the collection this side of the Ceratosaurus. We’re looking at Euoplocephalus here, with a curiously twisty, serpentine body, a long flexible neck and, strangest of all, a cow’s head, complete with bull horns! Meanwhile, nobody read the memo that ankylosaur means “stiff reptile”. 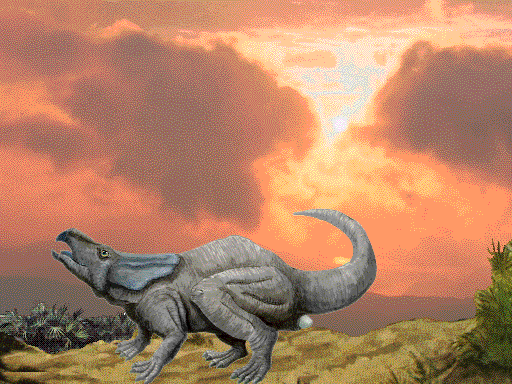 Caught in the act! Protoceratops is famous for its eggs, of course, but how rare is it for an artist to illustrate this animal mid-lay? Seems like we’re privvy to something quite intimate, here. The fact that it’s just another generic background that’s being used here – no actual nest in sight – makes it somewhat awkward, like those eggs are just going to roll away, but again, points for creativity. 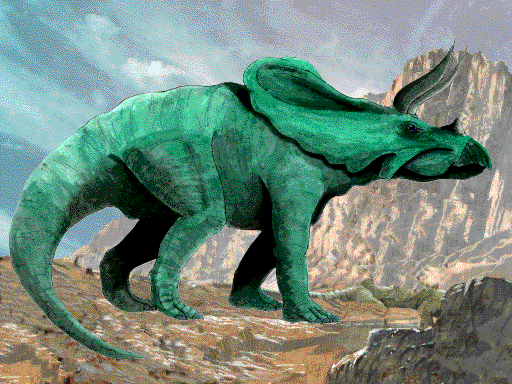 Torosaurus looks pretty sweet. When I looked at it I thought “Sibbick”, but the posing and details are actually quite different. I like this drawing quite a bit more than the Triceratops, actually. Majestic, and in a shade of green that you only get in those fancy designer reptile morphs. 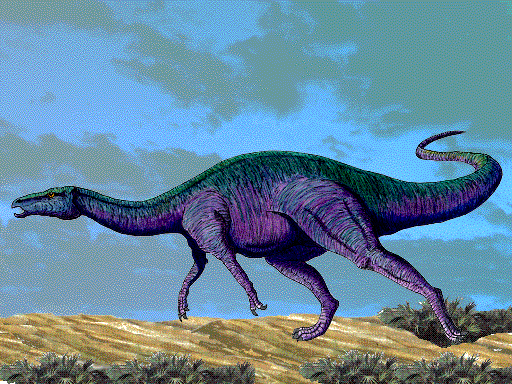 And finally, an undefinable, bipedal, vaguely beaky dinosaur in nineties media? Must be Segnosaurus! Another indication that the Normanpedia was probably used as a resource for this program, although Bennett has enough artistic integrity not to copy Sibbick’s exact pose and colour scheme (you know we’ve seen artists do exactly that). The text is lost, so I have no idea if the authors considered Segnosaurus a piscivorous theropod, some late-surviving “prosauropod”, or something else altogether.

And that’s Dinosaurs! A Multimedia Encyclopedia. Compared to other contemporaneous dinosaur media, this one seems to have been somewhat lost to time, but it’s something that I personally have warm memories of, and that has been formative in my own journey towards palaeo fandom. And that’s what we’re for, isn’t it? To preserve vintage and unusual dinosaur art of all kinds and all levels, so that illustrations like these might get a second glance beyond their intended reach. Valerie Bennett’s drawings probably didn’t age as well as I might have hoped when I ordered this nostalgic disc from Amazon, but I’m still happy I got to see all this again and share my honest thoughts.

Next up from me: actually I’ve got a bunch of things in the pipeline, so we’ll see what I get to first.