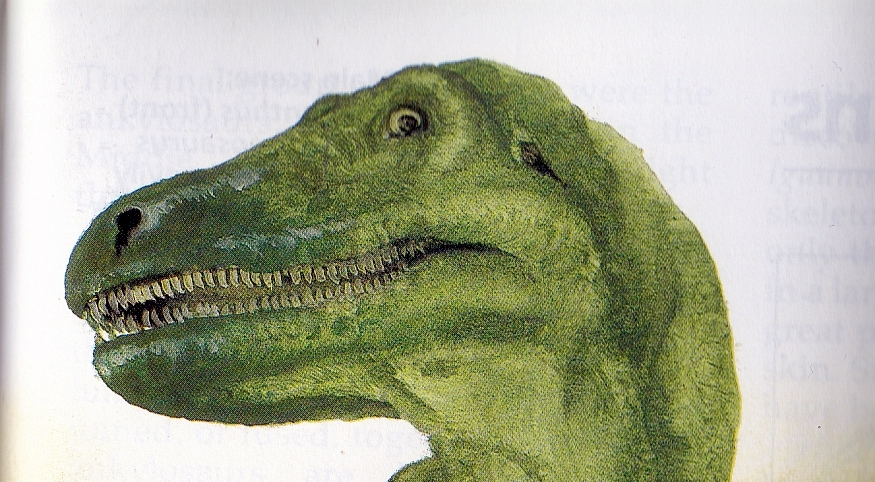 Given that dinosaurs are so notorious in the popular imagination for having grown Very Large far more often than they had any right to, it’s only fitting that so many dinosaur books – especially those aimed at children – have adopted a correspondingly chunky, oversized format. The appeal is obvious, even if it means that the bloody things simply refuse to squeeze under my scanner. The Giant Book of Dinosaurs is around 24.5cm wide and 34.5cm tall – big enough that I couldn’t even get the whole cover in. As such, I’m happy to inform you that this is “a colourful guide to the fascinating world of the dinosaurs, written by Dr Michael Benton”, for that is what has been chopped off. Published in 1988 by Hamlyn, it’s very typical of its time (right down to being written by Mike Benton). 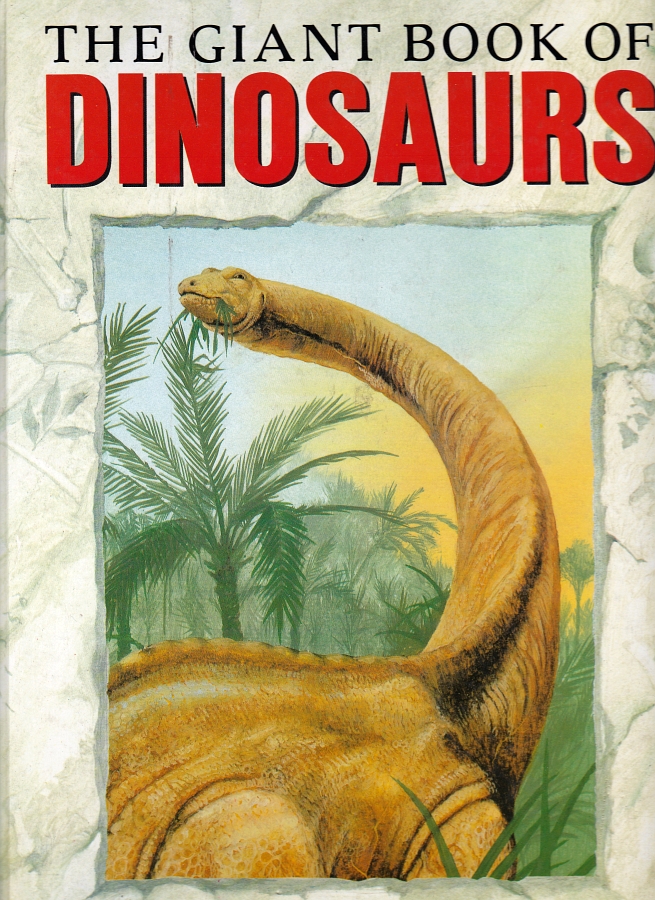 Martin Knowelden handled illustration duties here. I wasn’t familiar with him before picking this up, but a quick Google turns up a lot of wildlife books (including Learn to Paint Wildlife) and even a mention of British kids’ TV show Jackanory. Sadly, though, biographical details seem to otherwise be very thin on the ground. I think it’s fair to say that he was another one of those wildlife artists who was by no means a dinosaur specialist, and therefore drew a lot upon other artists’ work as featured in what books he could get his hands on at the time. In the late ’80s, that would appear to have involved a fair amount of Bernard Robinson and John Sibbick – the brontosaur on the cover is rather reminiscent of a notoriously portly Robinson creation. (Got to love that graphic design, by the way. It couldn’t be more screamingly late ’80s – early ’90s if you stuck a zany confetti pattern on the background.) 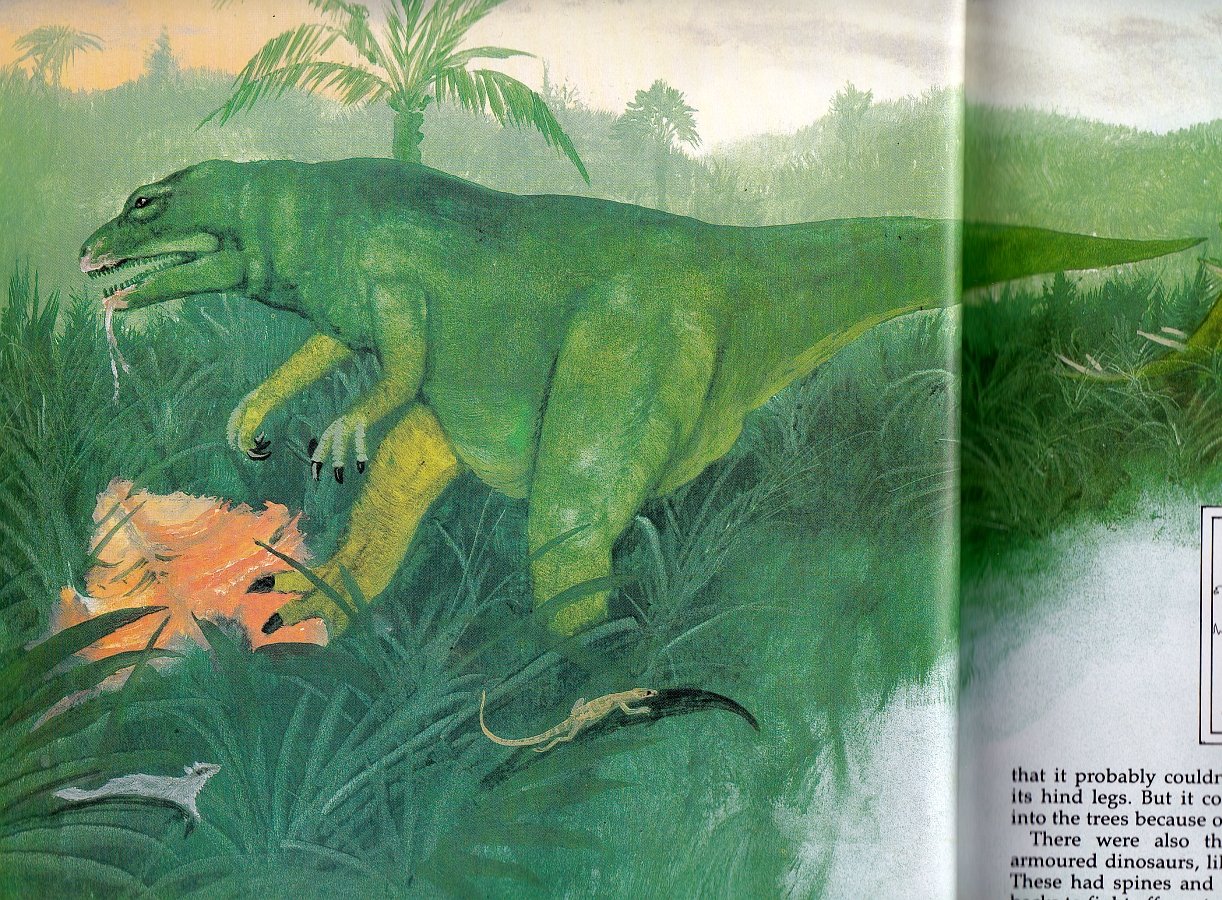 Flicking through this book, one gets the impression that Knowelden might have been thinking a little too much of dinosaurs as being ‘other’ – inherently strange and different – rather than drawing on his obviously extensive knowledge of living animals. The foliage in many of the scenes is quite beautiful, in an impressionistic sort of way – there are far too many scenes in which dinosaurs inhabit barren deserts for no good reason, but where vegetation does appear, it’s suitably lush, green and attractive. This is well evidenced in his Middle Jurassic scene. The dinosaurs themselves don’t tend to fare so well – they’re not truly old-school, but they do have that rather lumpen ’80s look in which musculoskeletal anatomy takes the occasional holiday. I’ve naturally chosen to pick out the above Megalosaurus because it’s particularly bizarre-looking, and I’m just a horrible person.

There are still elements of that Neave Parker hunchback here, but more than that, you’ve got to wonder what’s going on with that torso. Where do the ribs go? How do the ribs go? The head is also curious, with its teeth extending back behind the orbit, which is itself raised up really high. In fairness, this probably is the worst theropod in the book, and the scene as a whole is rather pleasant. I’ll throw in my dodgy photo of it below. 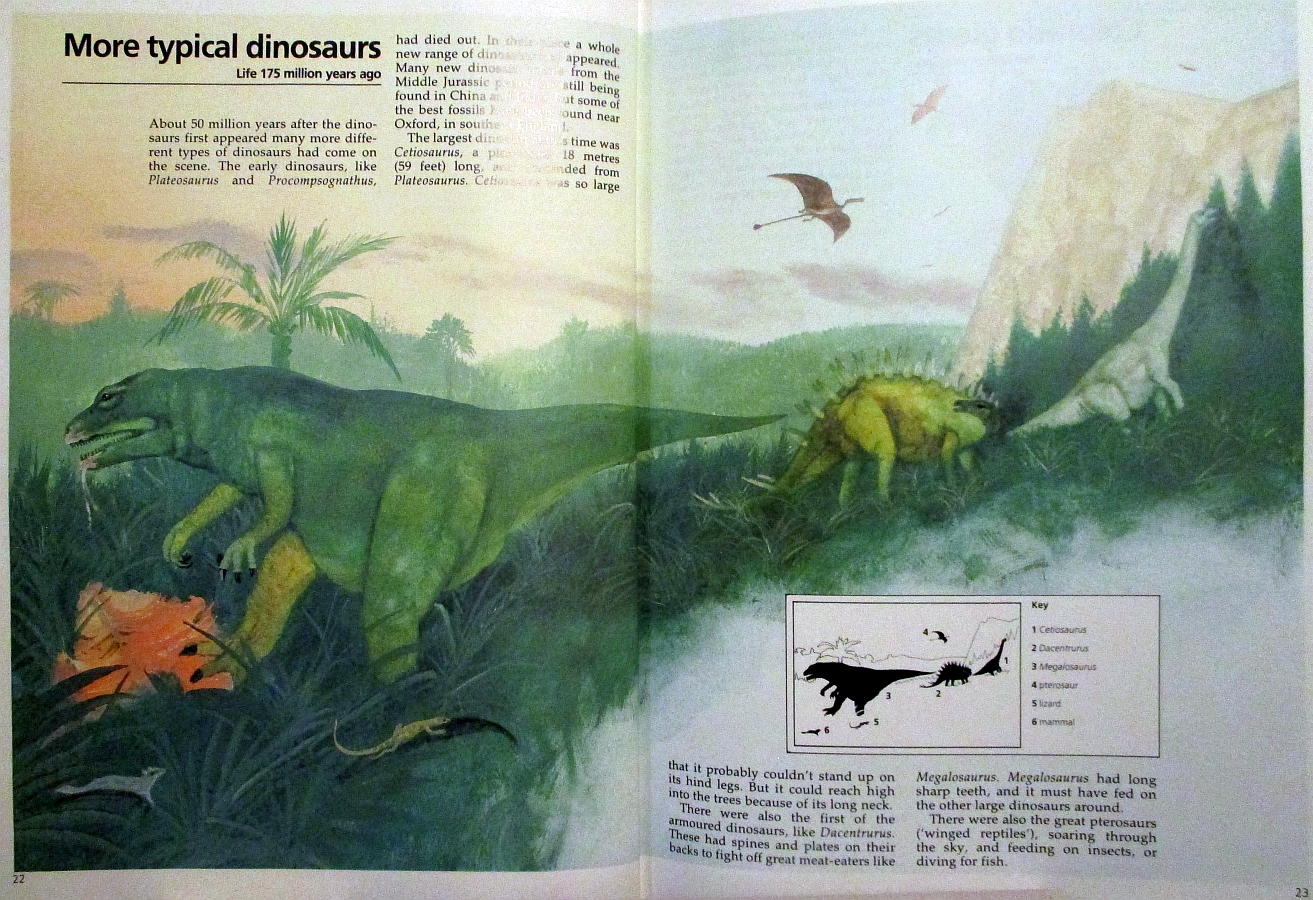 Moving upward to the Late Jurassic, the large theropods don’t look quite so freaky, instead reflecting tropes that one might typically expect to see in a book like this. Both Allosaurus and Ceratosaurus have horns that are smoothed over into neat bumps and ridges, and neatly uniform rows of tiny teeth. There is, nevertheless, something I rather like about this Allosaurus – it looks convincingly chunky, solid and muscular, and the brown stripes around its mouth are a nice touch. Ceratosaurus is conspicuously missing the bony nodules that should run down its back, but the red tail tip is an interesting little detail.

While the Allosaurus in the above scene has a rather smoothed-over face – like he’s in one of those cosmetics ads that so conspire to mercilessly destroy the self esteem of the unsuspecting public – his bumpy cranial parts disappear altogether when he pops up again later on, engaged in battle with Stegosaurus (below). Still, I rather suspect that this was originally meant to be Rexy, but Dr Benton wasn’t too happy about such an obvious anachronism. To wit:

Never mind, though. It’s Allosaurus, just like the T. rex in Fantasia was Allosaurus when I was 5 years old and blissfully unaware of Walt Disney’s plot to misinform the world’s children through the medium of anachronistic prehistoric scenes hypnotically animated in time to a chopped-up version of Stravinsky’s The Rite of Spring. But I see you now, Disney. I see you. 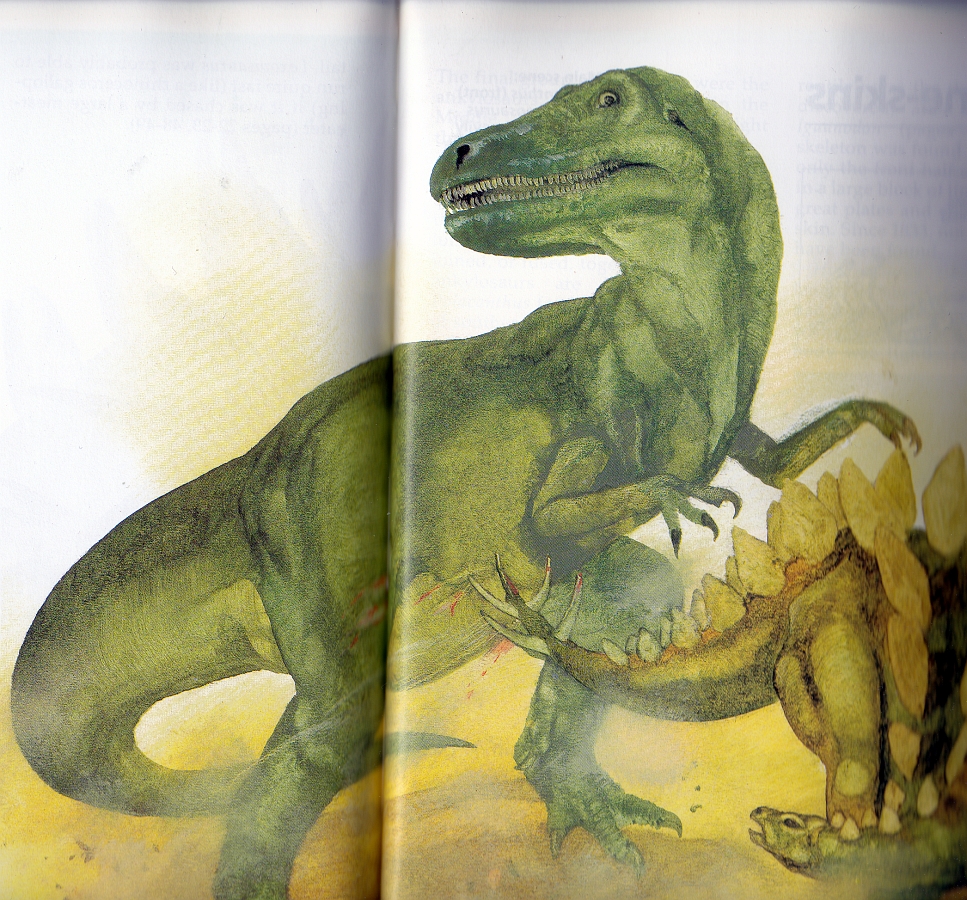 I think the head is worth a closer look. He’s really not happy. Reminds me of a meme video of cats reacting to durians. 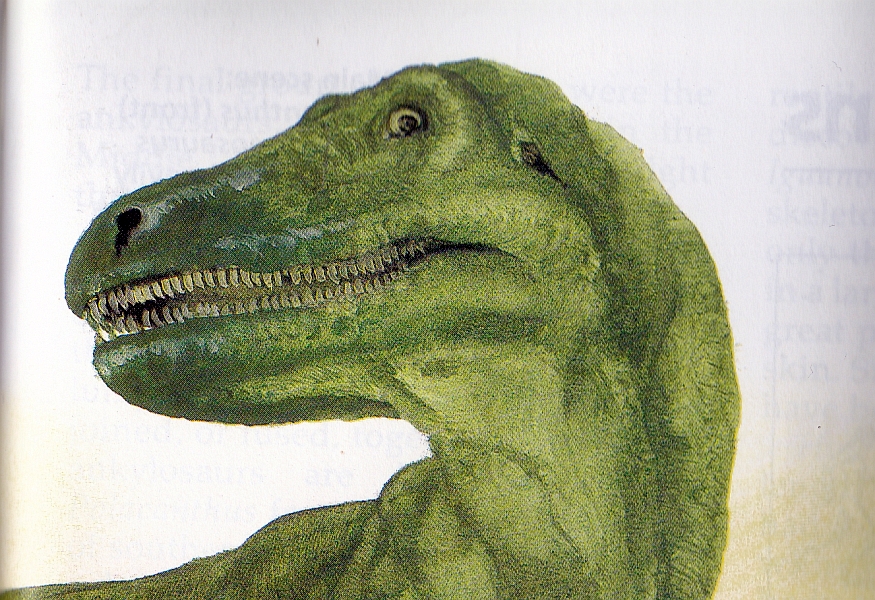 Moving swiftly on, and it’s worth mentioning, again, that Knowelden did include some very lovely backgrounds in his work here. The below iffy photo doesn’t give the best impression (my fault), but the beautifully detailed foliage and painterly mountains can still readily be appreciated. Both Baryonyx and Iguanodon aren’t too bad, either, although I have a feeling that the former is, er, quite heavily inspired by another work. Baryonyx had only been named in 1986, and while it here resembles a spinosaur as we now understand them, Benton describes it elsewhere as a possible dromaeosaur relative and wonders if the proposed hand claw actually belonged on the foot. Similar ideas are present in the Normanpedia (1985), and make for an interesting little snippet of palaeontological history. 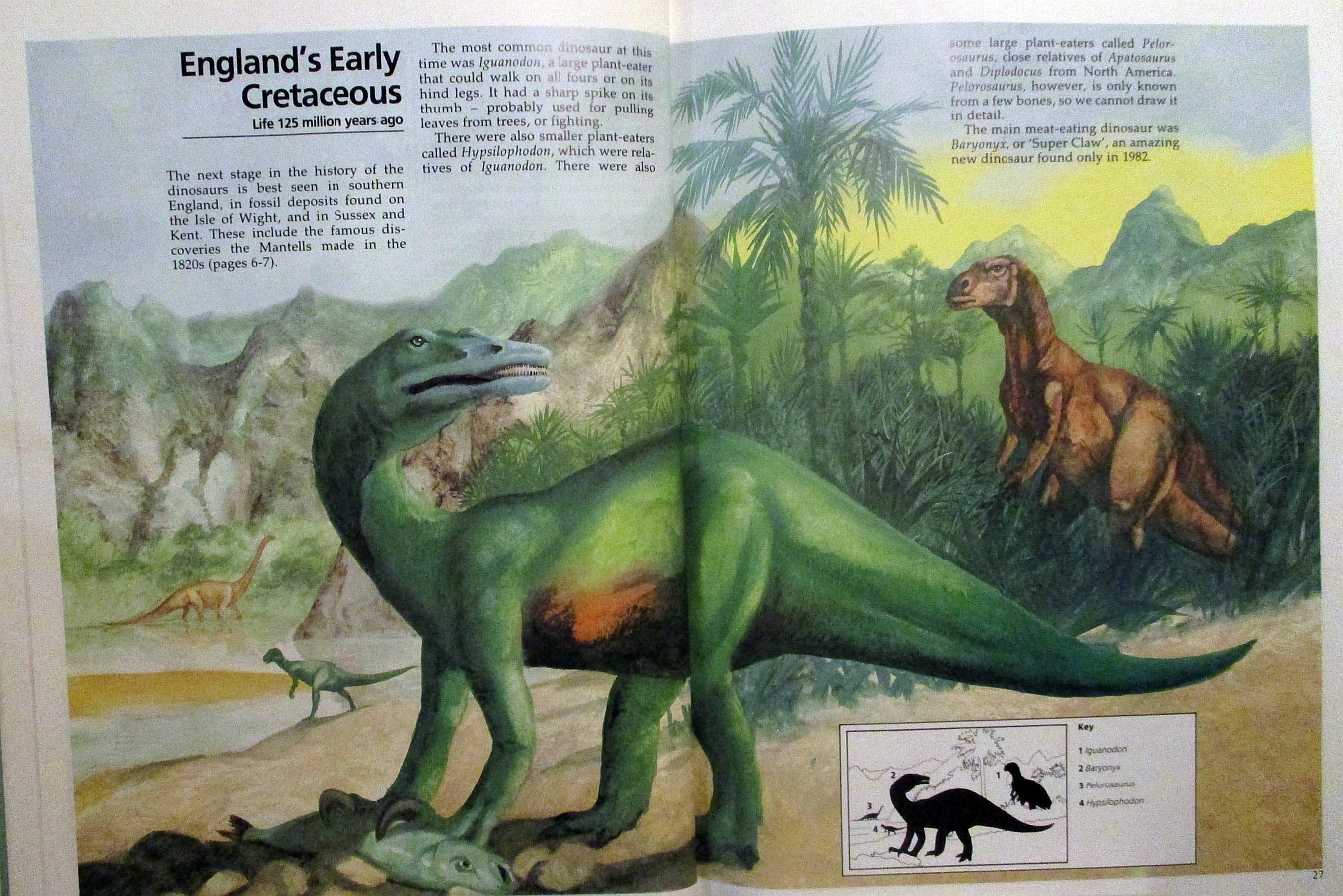 We’ve had “Super Claw”, so here’s Super Teeth. Rexy’s plus-sized frame luxuriates over a double-paged spread, and makes plain the broad brush strokes employed by the artist (a technique I rather like). As reconstructions go, it’s very mid-’80s Sibbickian, in stature and overall appearance even if it lacks Sibbick’s slightly peculiar skin textures. It also rather reminds me of dinosaur toys I had as a child, especially the large UKRD Tyrannosaurus (which was almost certainly based on artworks like this, if not this precise one).

What’s most interesting about this scene is what’s going on in the background – there appear to be a group of tyrannosaurs just hanging out (one of which doesn’t half resemble a Charles Knight painting). Two of them seem to be interacting in some way – one is low to the ground, almost submissive, with its head cocked to the side. If only that had been foregrounded – it would have made for a much more interesting piece. 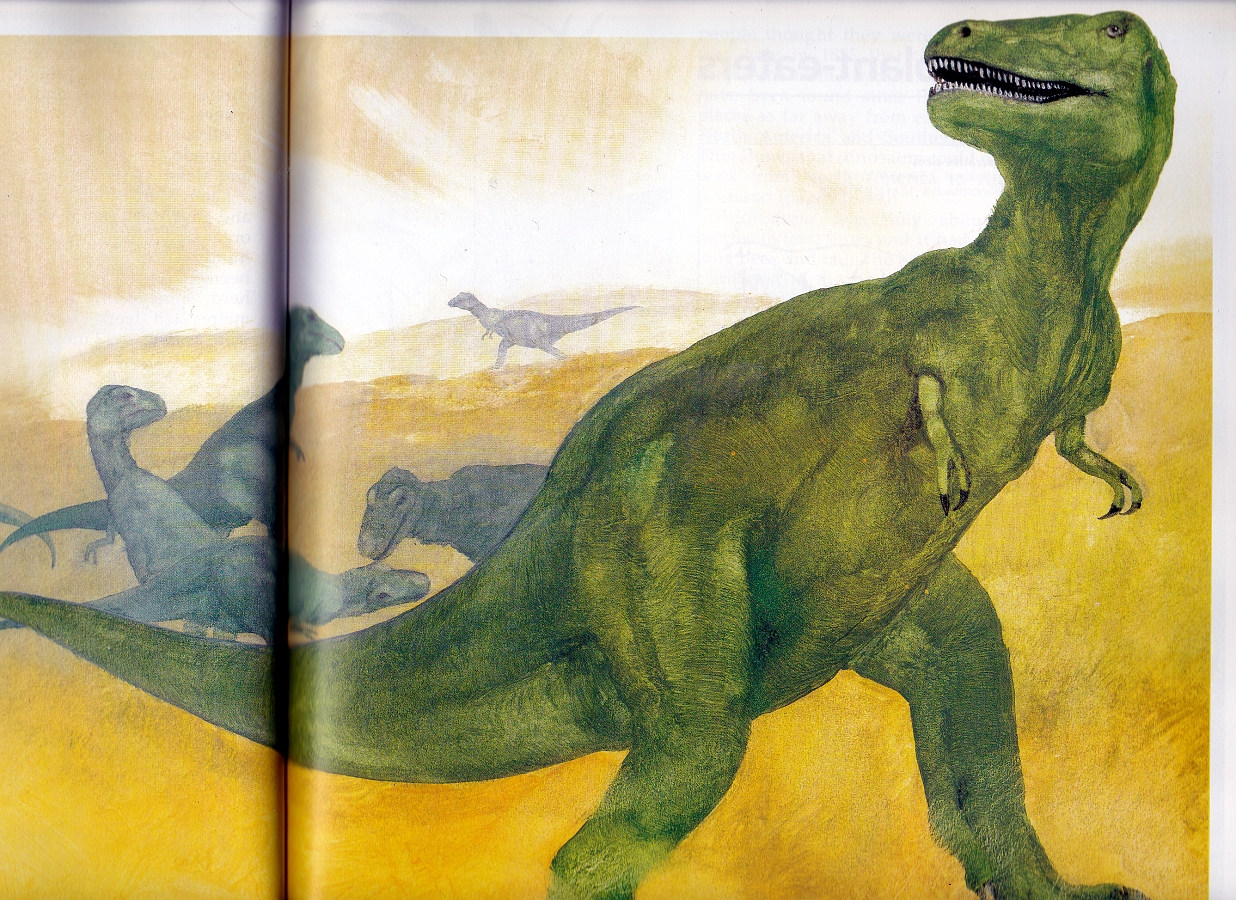 As with Totally Allosaurus and Stegosaurus, Rexy comes a-cropper in an encounter with a furious-looking thyreophoran, namely Ankylosaurus (below). Again, the expression on the predator’s face is just superb. 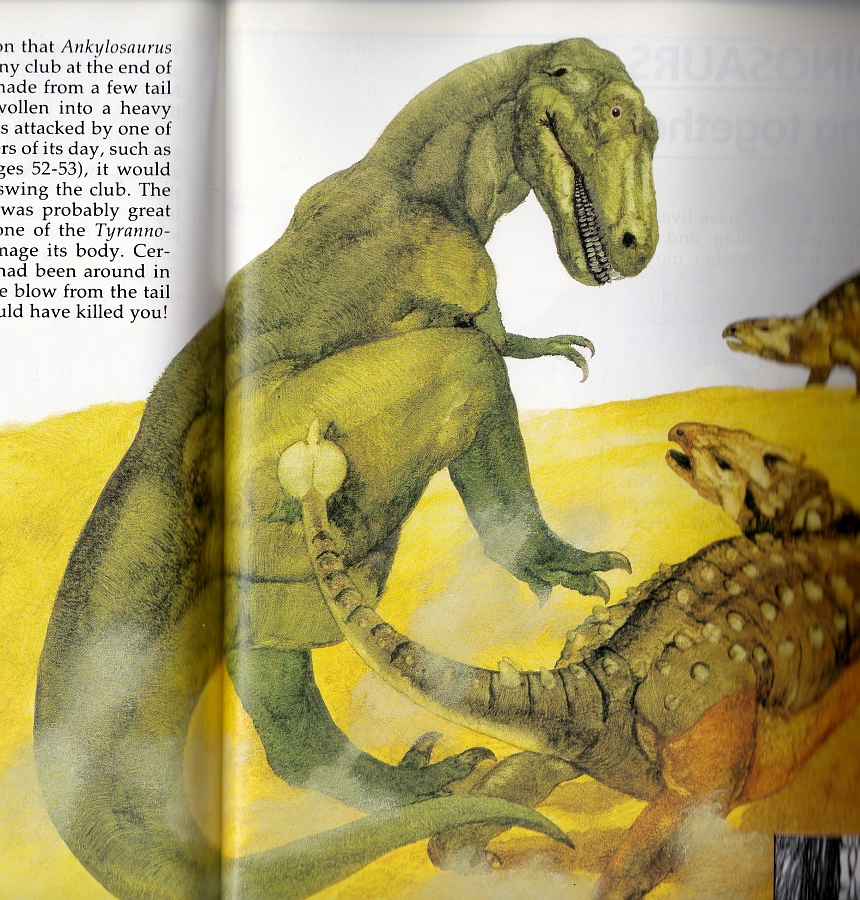 The Normanpedia featured a memorable spread of mystery theropods, and so The Giant Book of Dinosaurs, too, features those same mystery theropods…well, two of them. Segnosaurus isn’t as flamboyant as in Sibbick’s piece, but is notably more colourful than the majority of other theropods in this book. A fish-eating lifestyle is suggested by Benton, but not illustrated this time. Ah, shame. Avimimus, meanwhile, has feather ridges along its arms and tail but appears to otherwise be naked, which is rather unusual; it’s also chasing after a flying insect a la Sibbick. Deinocheirus gets a mention, too, with Benton speculating that

“If the rest of the skeleton of Deinocheirus is ever found, it may turn out to be the deadliest meat-eating dinosaur of all!”

Or, it may turn out to be a dumpy freak with a humped back and a honking great duck beak. Where’s our giant ornithomimid murderbeast, science? How disappointing. 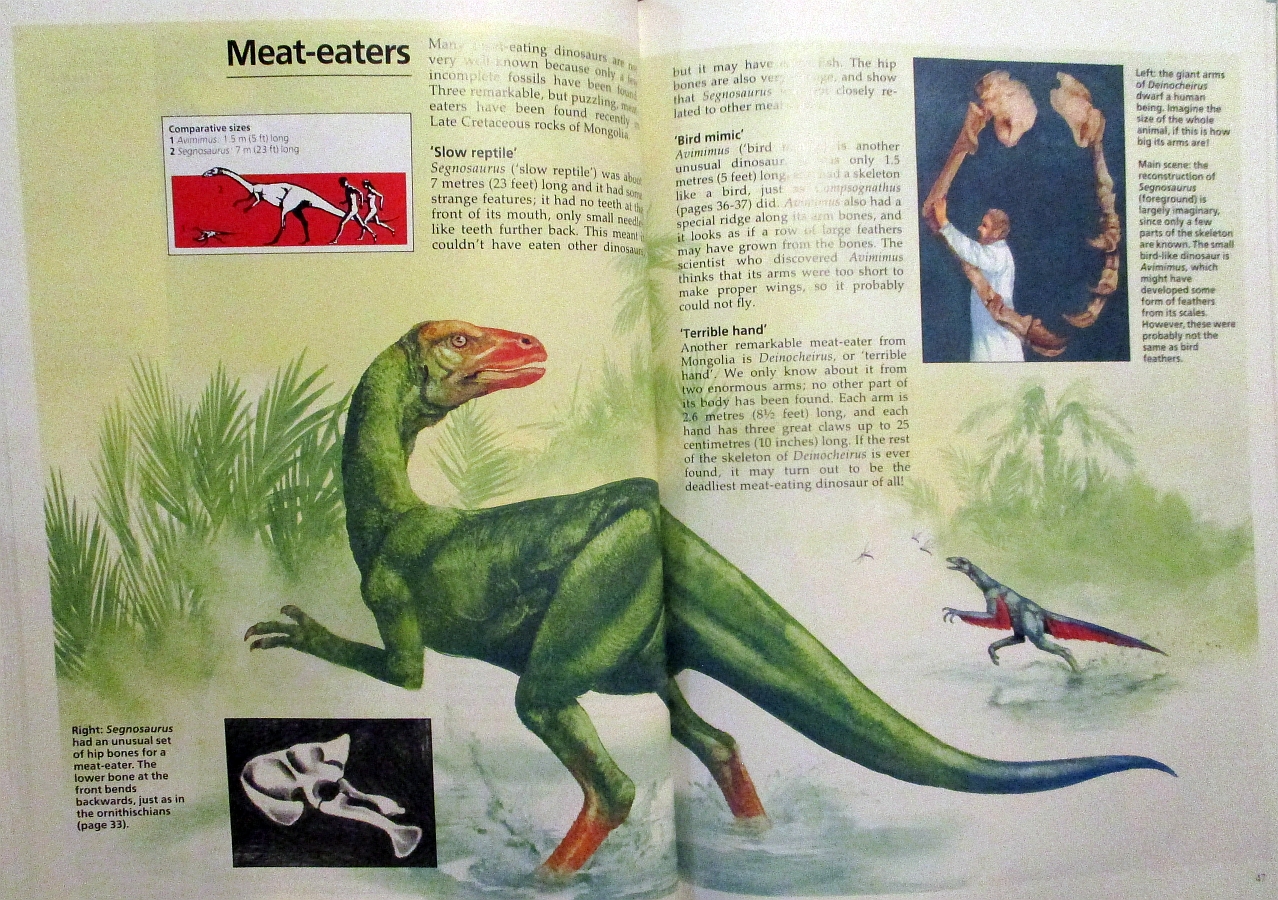 And finally…there might be a Velociraptor in here somewhere. 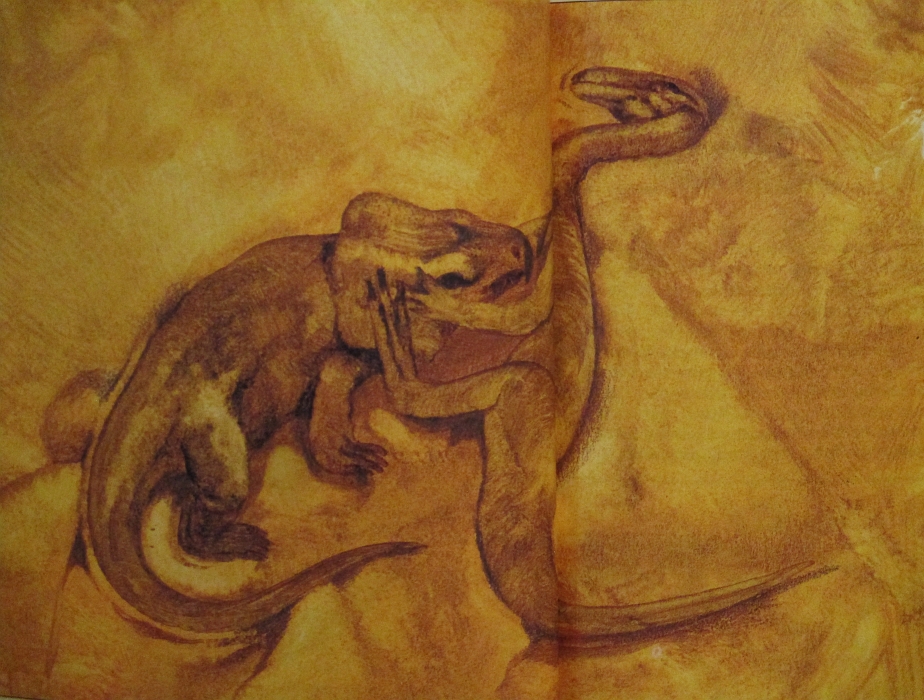 The Giant Book of Dinosaurs will return! 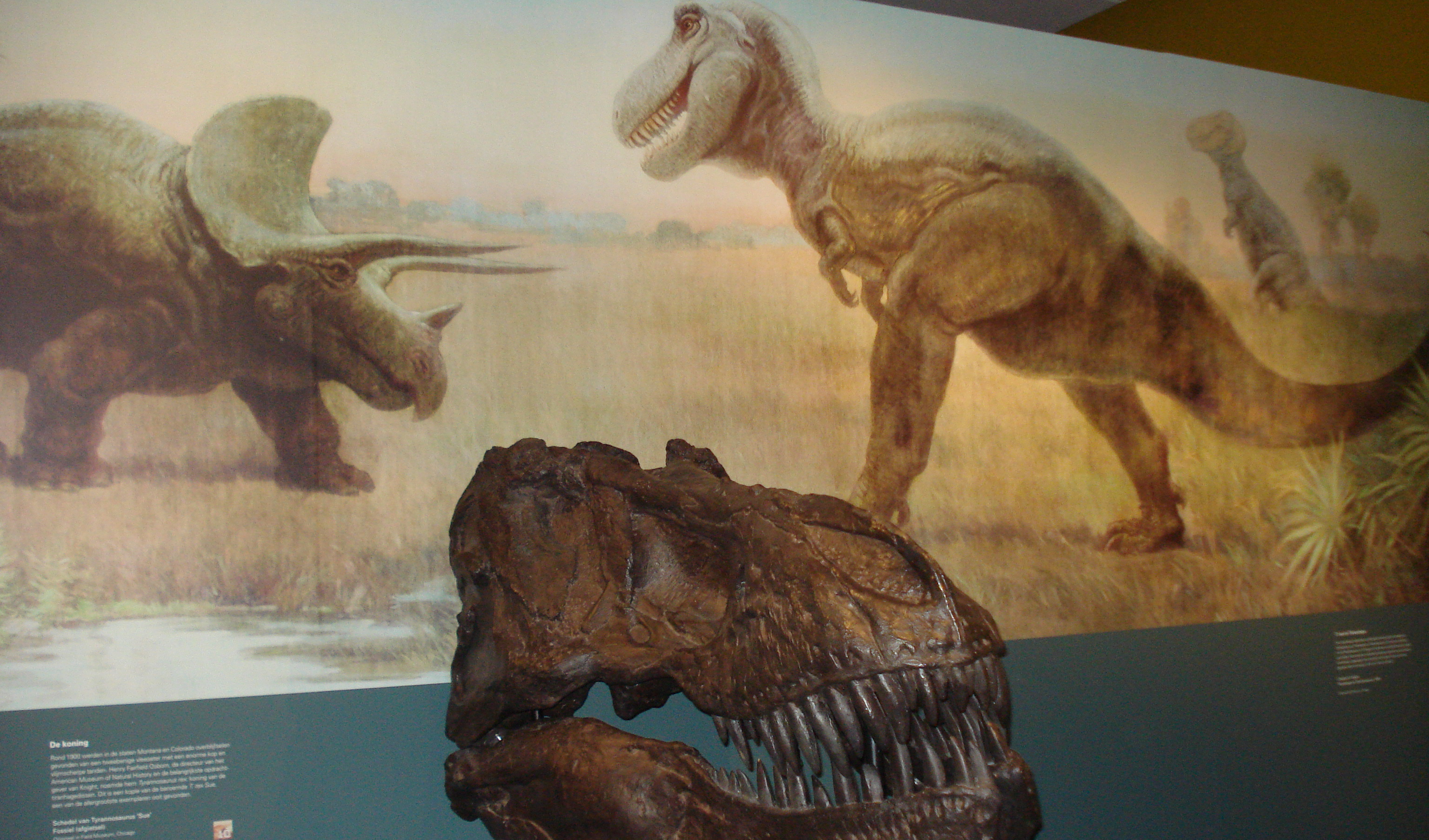