Although I became interested in dinosaurs before the release of that film in 1993, it was only just before, and as such I’m a tiny bit too young to remember Dinosaur!, a 1991 TV series that featured as consultant none other than sexily shiny-domed Iguanodon expert Dr David Norman. Yes, the very same Dr Norman who wrote the Normanpedia and stared out sultrily in black and white from the back cover of each issue of Dinosaurs! magazine (whether or not the exclamation mark implied any relation between the two projects, I’m yet to determine). A tie-in book was released along with the series, featuring superb art by the likes of Greg Paul, John Gurche and (of course) John Sibbick.

I bought said book a number of years ago but filed it away, as it seemed to only feature very familiar art that we’d covered here before. However, older, wiser and increasingly desperate, I dug it out to see if there was anything I’d missed all those years ago. And indeed there was. Here, then, are some of the more obscure bits and pieces from Dinosaur!, the book of the 1991 show. 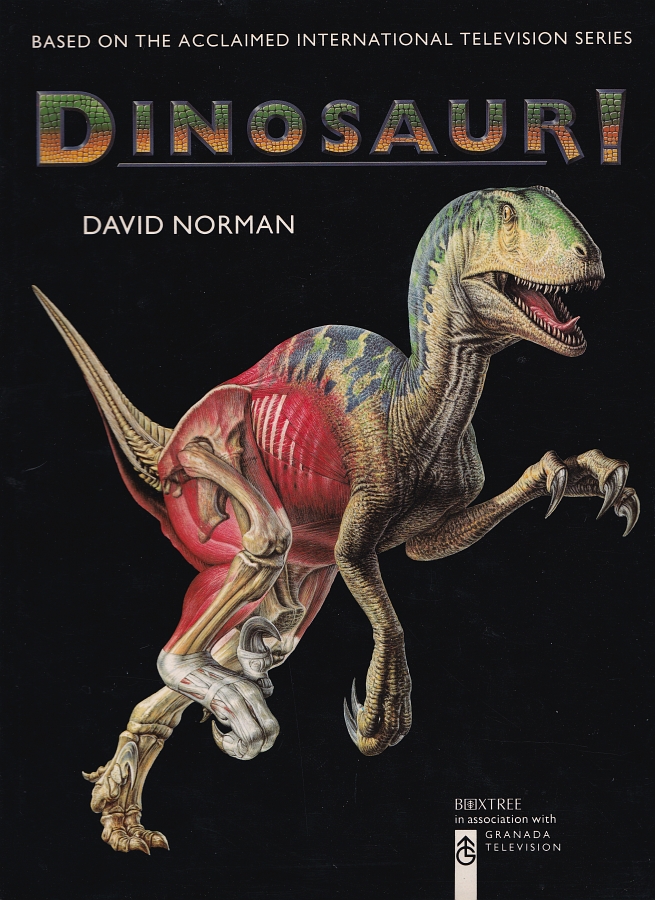 How about that dust jacket, first of all? It was especially comissioned for the book, as Norman wanted an illustration that encapsulated each stage of reconstruction – from the bare bones, to musculature, and finally the fleshed-out animal. It also had to be exciting enough to grab people’s attention, and so Sibbick gave us this glorious Deinonychus, running at full pelt and brandishing some truly evil-looking claws. Certain people have described it as “weird”, but really, it isn’t so much for 1991 – especially not when compared with the Normanpedia version.

Apart from the obvious scaly skin and bunny hands, the head does look oddly tall and short by modern standards, but it’s in line with most contemporary reconstructions that still drew upon Ostrom’s work from decades prior. It also manages to look solid, weighty and uncannily convincing, as so much of Sibbick’s best work does. And it’s a scary predator with big claws and teeth, isolated on a black background, being brought to terrifying life right in front of us. It’s a very good cover. 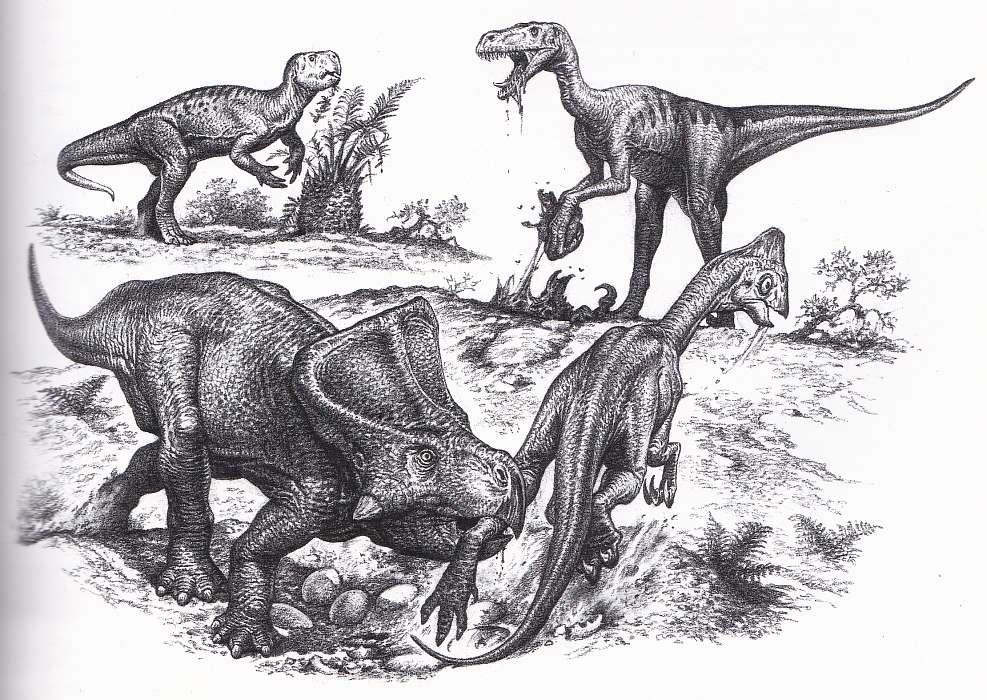 There’s more Sibbick inside, including a number of familiar works that featured in the TV show, although there’s notably an absence of anything Normanpedia (which is a good thing). Among the lesser-seen pieces is the above scene depicting Mongolian dinosaurs, in which Velociraptor is shown gorily devouring a carcass, while a terrified-looking bug-eyed Oviraptor is about to have its foot severed by yet another brutal Protoceratops. The look of the theropods, in particular, is so gloriously early ’90s that I’d shed a tear over thoughts of innocence lost, were I not quite so insensible. 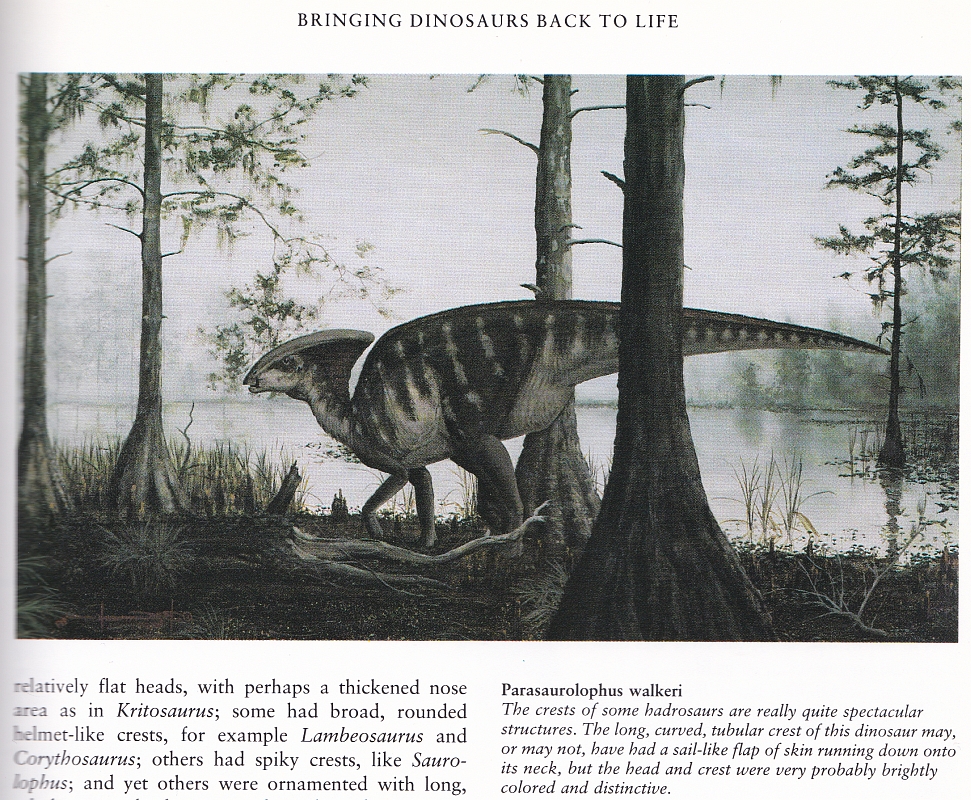 Moving on from The Sibb, here’s an artist that I really feel we haven’t mentioned quite enough – Brian Franczak. Several of Franczak’s pieces appear in this book, and they really are quite sublime. They’re notable for their muted colour palette, lush environments, and reconstructions that are absolutely stunning for the time in which they were produced. The above Parasaurolophus is a particular favourite of mine, a single animal expertly situated within its beautifully realised wider environment, itself reconstructed with careful attention to detail and given countershading that makes sense given its habitat. I’d be proud to have it up on my wall. 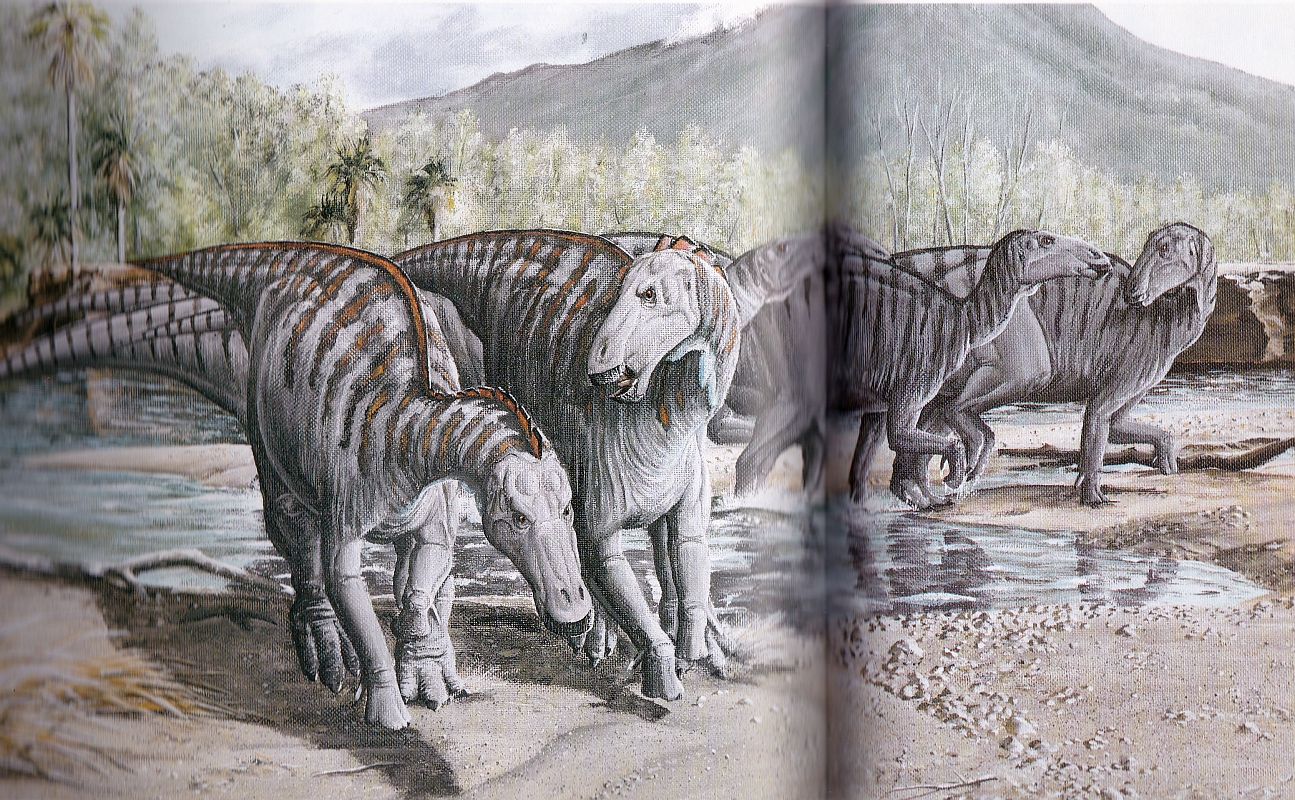 Franczak also contributes the above illustration of a herd of Telmatosaurus, a small hadrosaur from what is now Romania. This piece addresses what was apparently a common criticism of Franzak’s work (at least, according to an article by that there Naish) in that the animals aren’t only shown in straightforward lateral view. Indeed, the individual on the left is facing the viewer almost directly, giving us an excellent view of the ornithopod body plan from an unusual perspective. Again, this is a wonderfully well-researched piece with commendable attention to detail in both the animals (those dorsal crests!) and the environment. It’s a real shame, then, that Franczak died last year (it’s what the aforementioned post from Darren was prompted by); I’d really like to seek out more of his work and help give it the attention it truly deserves. 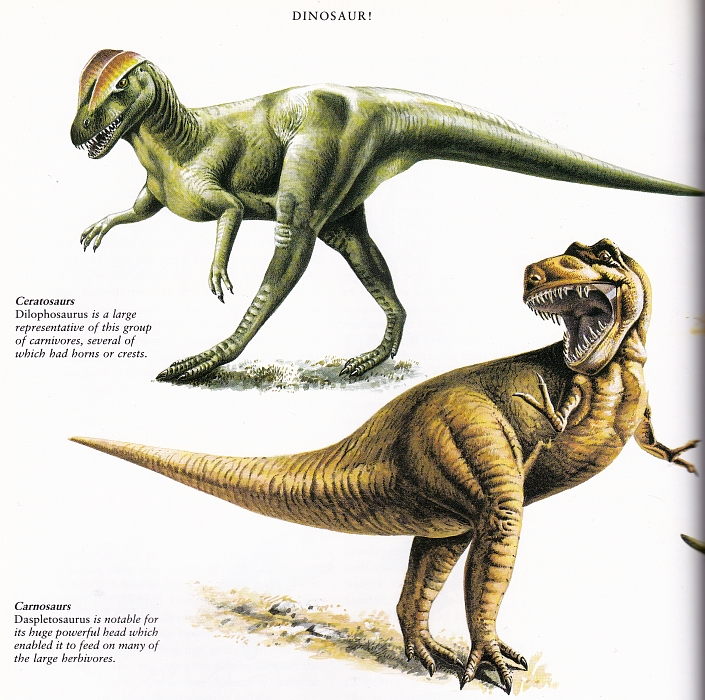 From the relatively unfamiliar, to the eyebrow-raisingly all-too-familiar – here’s a Daspletosaurus that seems to recall the cover of a certain heretical book by a bearded guy in a big hat. What’s most amusing is that said Gurche piece actually appears in this book, too. I don’t want to be too hard on the artist (Andrew Robinson), as I know the kinds of pressures artists face and how hard decent references were to come by back in the day. On the other hand, he might have filled the missing tooth in.

That Dilophosaurus, with its peculiar split crest arrangement, looks a tad familiar too. But I can’t quite put my finger on it. Answers on a postcard (or in a comment). 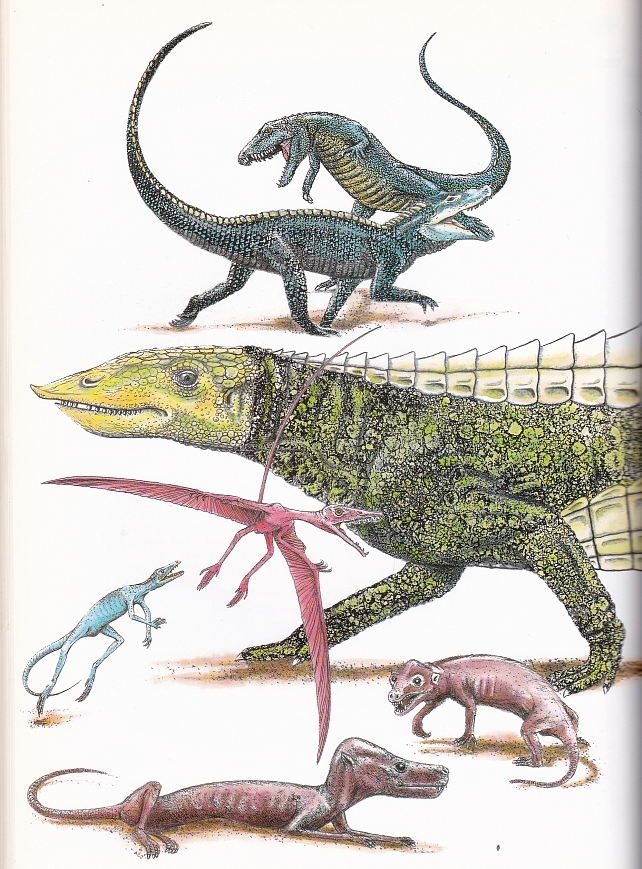 Now here’s an illustration you almost certainly haven’t seen before, unless you’ve ever owned this book. This is actually the second page of a montage of Triassic beasties, as illustrated by Arril Johnson. At top, we have Saurosuchus fighting Ornithosuchus; in the middle, there’s Stagonolepis; and underneath, Lagosuchus leaps at Eudimorphodon. The two slightly unsettling-looking zombie rats underneath are Oligokyphus (left) and Trithelodon (right).

There’s no denying that some of these are quite disturbingly skinny, especially the synapsids (Andrea Cau will also be along in a moment to comment on their fleshy ears). Nevertheless, one must appreciate a bit of representation for these lesser-seen creatures in a pop dinosaur book. Besides, Arril Johnson has rather a lot more up his sleeve. 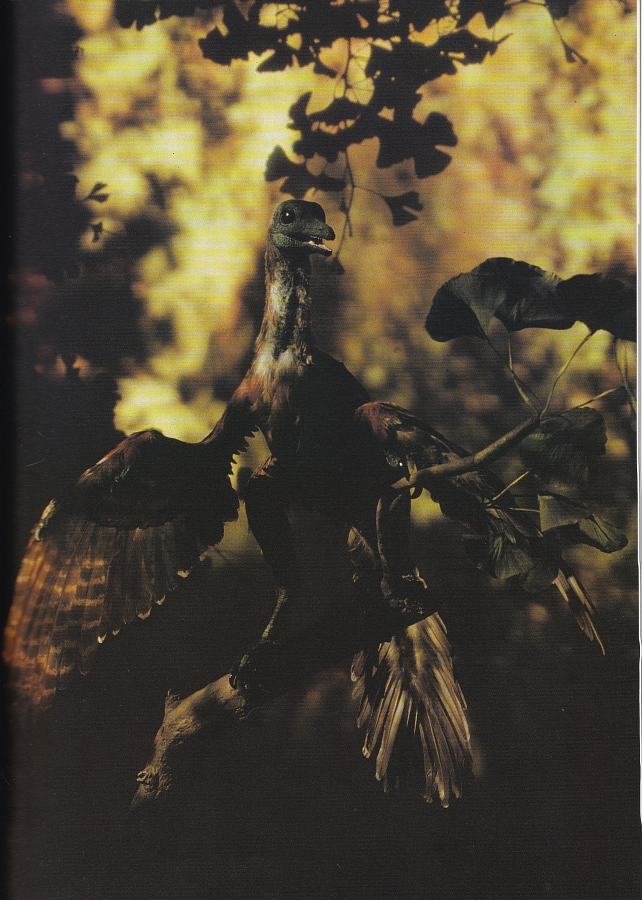 Because, yes, that’ll be Arril Johnson, senior lecturer in animation at Bristol University to the likes of you. Highly skilled model maker Arril Johnson. Johnson receives the credit here for “all models at the City of Bristol Museum & Art Gallery”, and what lovely models they are – including the above Archaeopteryx, beautifully shot in low light with wings akimbo. There’s something wonderfully evocative about the above image – a hazy look at a creature from a vanished world, an animal uncanny in its weird distortion of the everyday. Perhaps there are certain details that we’d want to change, 30 years on – I still really like it. 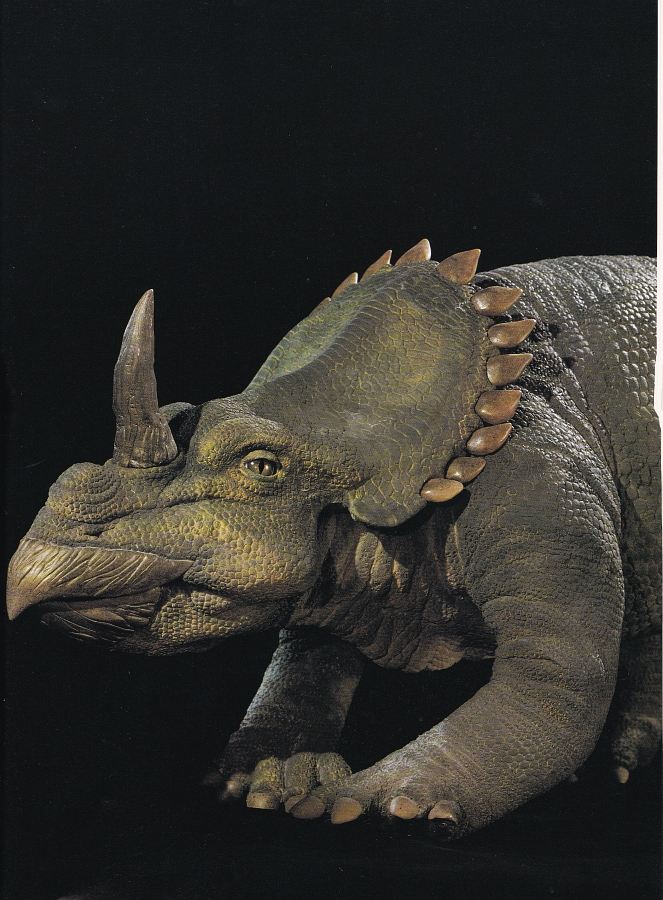 In addition to museum models, we’re treated to creations used in the TV show, like the above Centrosaurus. It’s credited to Steve Morris, with “models by Peter Minister”, an artist who’s now had a long career in model-making and special effects. It also looks a bit dopey and adorable, with its oversized beak and chunky, slightly awkwardly positioned legs – having said that, this appears to have been a model that was animated for the show, and so probably looked a lot better in motion. I only wish I could watch it for myself, but I haven’t been able to track it down online so far. All help much appreciated… 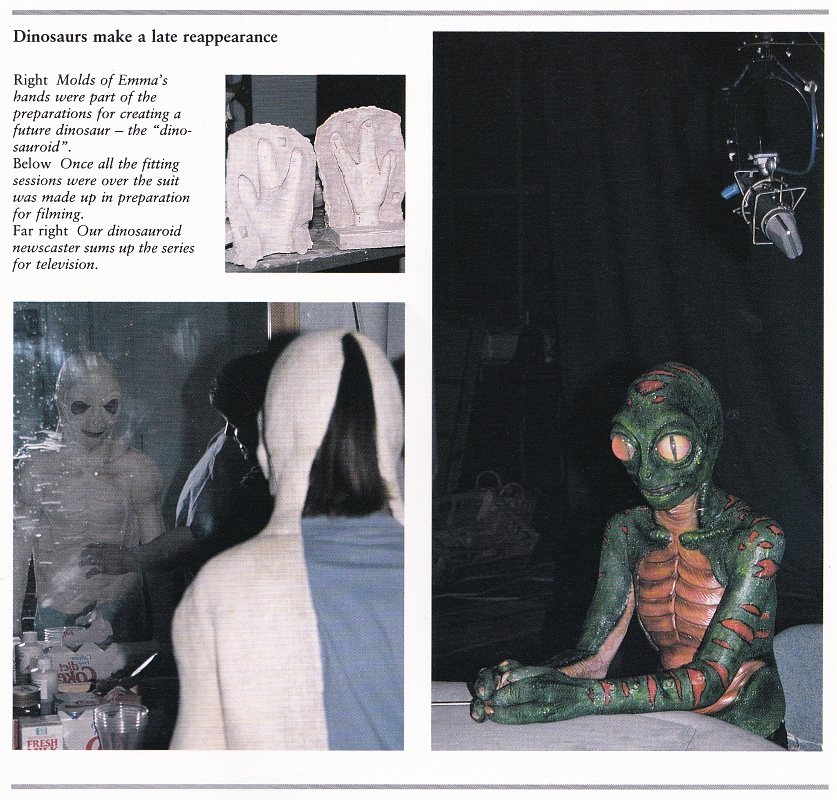 And finally…they only went and put a Dinosauroid in the show, as performed by Emma Norman (relation: undetermined) in glorious Superrubbersuitomation. The suit itself was made by Peter Minister. Norman indicates that this was really all in fun, and possibly to give children nightmares; he was all by accounts successful in achieving the latter. The hollow-eyed mould in the left hand photo actually looks rather scarier. Dinosauroid with blank, bug-like black eyes anyone?