George Solonevich is one my favorite artists covered at LITC. His work stands out during an era of paleoart that saw so many artists copying Knight and Burian. I’ve long planned to do a “golden oldie” post on him, and today I’m finally marking that off the to-do list. I initially wrote a brief post about him in 2010, which Marc followed up in more fleshed-out form a few years later (part one and two). The bulk of today’s post will be Marc’s posts, combined into a glorious whole. First, some biographical info.

Inga and George Solonevich with their dog, Maya on October 19, 2000. Photograph © Eric Brady.

Solonevich seems to have been defiant and independent-minded from an early age, fleeing the Soviet Union as a teenager to Finland, where he met his future wife, Inga. Their early years were marked by a series of trials and traumas as they moved to and escaped from Nazi Germany. Eventually, the family emigrated from Argentina to the U.S., where they settled down on a mountain in Virginia’s Roanoke Valley.

Solonevich worked in various styles, from portraits to landscapes to subdued, techno-utopian space paintings. He is well known for those space illustrations; here are some created for the Golden Book Planets: Other Worlds of Our Solar System. George and Inga impacted many lives in their community, as evidenced by this Facebook group, where you can see many photos of the couple as well as George’s stunning artwork.

I hope you enjoy this trip back in time to Marc’s 2013 write-up. If you’ve not seen Solonevich’s paleoart before, you’re in for a treat.

This week’s book was lent to me by none other than Dave Hone – he of Archosaur Musings and Guardian fame (he’s also written a few scientific papers, or something). Not only that, it was once owned by a certain Darren Tanke, if the inscription inside the cover is to be believed. Of course, what’s far more important than any of that is the starkly obvious fact that many of the illustrations in Dinosaurs and more Dinosaurs are quite deranged – with more slavering, fanged, gnarled faces and over-the-top caricatures than a half hour of Fox News. 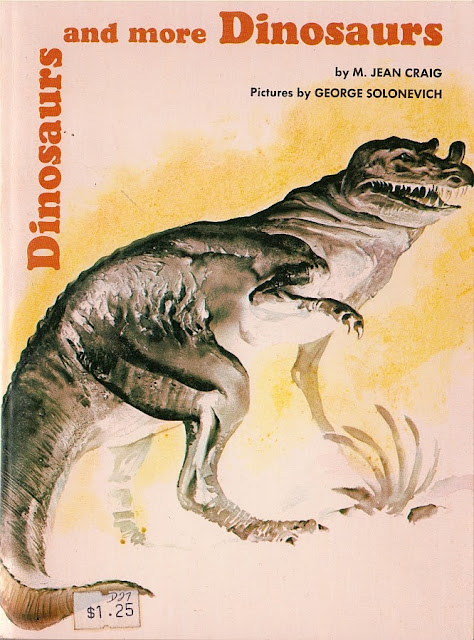 Of course, this isn’t to deny that the artwork has a certain beauty. Far from it – there’s plainly a skilled artist at work here, with George Solonevich’s superb (not to mention unusual, for a dinosaur book) use of a painting style that could be described as impasto; thick layers of paint built up to give an almost three-dimensional texture. Dating from 1965, the book is also fairly typical of the period in depicting dinosaurs as being rather podgy, slothful and monstrous. All the same, it’s hard to ignore the fact that, damn, they’re freaky. 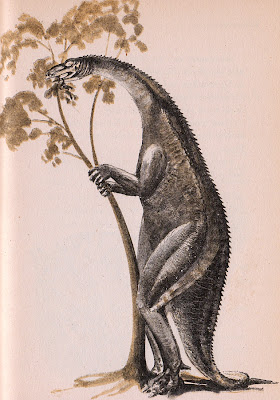 The book moves chronologically through the Mesozoic (no Dimetrodon this time!), starting with the Triassic likes of this suspiciously anthropomorphic Plateosaurus. Actually, this is one of the more humdrum entries in this compendium of stupendobeasts; the anatomy’s certainly weird, but you can see what Solonevich is getting at. With some other animals, it’s considerably more difficult to determine. 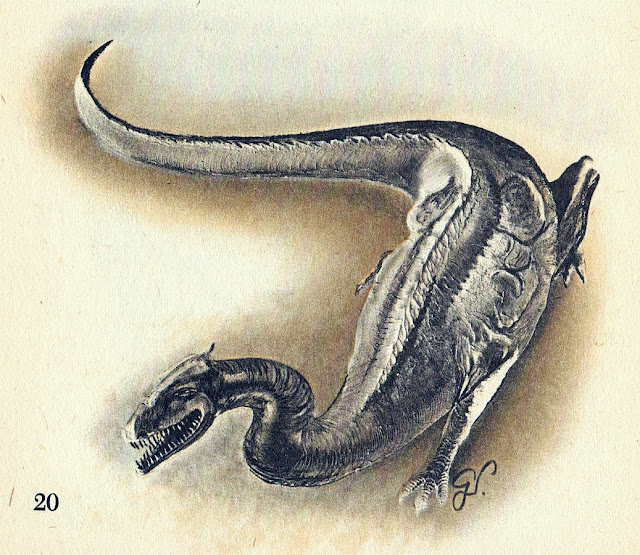 Take this slithering dragonoid, for example – it’s either a particularly nightmarish vision of Nessie, come a-crawlin’ from the murky depths of that infamous loch, or it’s the Early Jurassic sauropodomorph Anchisaurus. Take your pick. In the book, this prickly-mawed monstrosity is identified as Yaleosaurus, one of several peculiar uses of synonymous names. 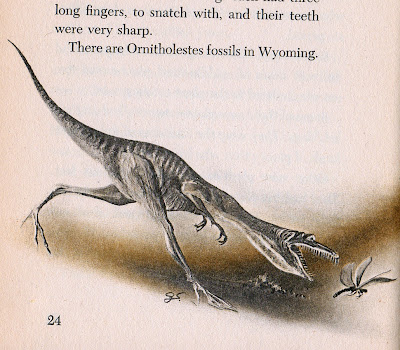 Taking a brief sojourn into the world of Jurassic theropods, this image of Ornitholestes (naturally, depicted chasing a flying animal) is one of my favourites, just for being particularly spindly and spidery, with jaws packed with teeth that go all the way back (something of a visual motif in this book). It also has toes like the crooked fingers of a wizened old fairy-tale crone. The voluminous throat pouch is a nice touch, I feel. 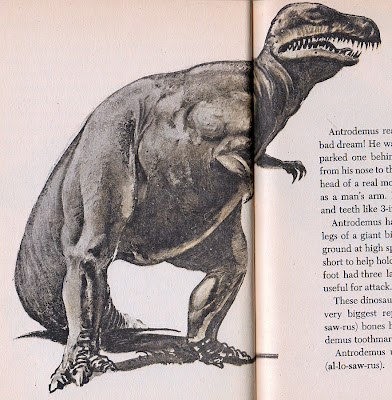 This one’s quite easy to guess – it’s a fat (ie. large) theropod with three fingers, so it must be Allosaurus (here identified as Antrodemus, one of those dodgy genera from the taxonomic anarchy of the 19th Century). The body is rather conventional by contemporary standards, and boasts some wonderfully executed texturing and careful use of tone. Atop this sits a pair of jaws, seemingly bereft of eyes, with a zipper-like mouth and the snaking tongue of an heraldic dragon. Grown large in its dotage on the fatty limbs of disobedient children, Antrodemus has succumbed to blindness, but nevertheless can smell the sticky fingers of boys and girls who eat too many sweets, and emerges from their wardrobes as they sleep. 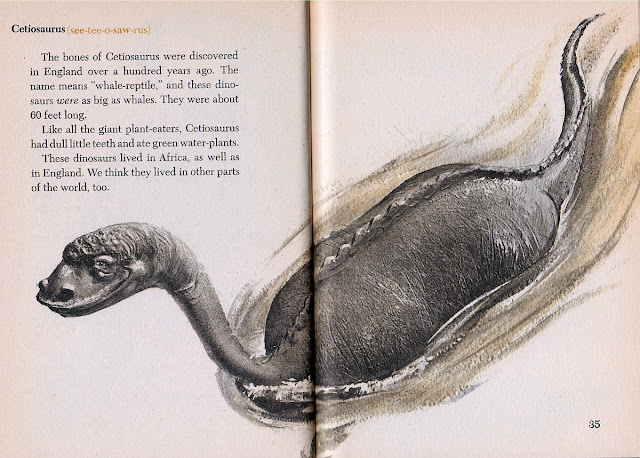 But never mind all that – let’s return to the far more friendly world of sauropodomorphs! Here we see Cetiosaurus, always a smiley fellow, and quite clever too – in fact, it wore its brains on the outside. It may have had “dull little teeth”, but the life aquatic was anything but banal for our plumbing-necked friend. 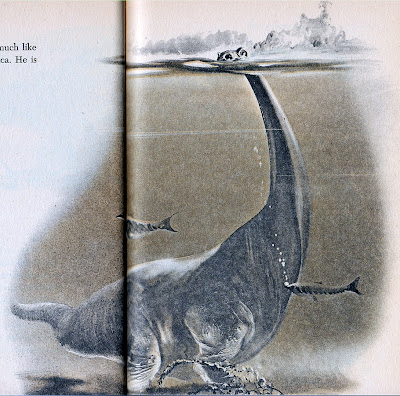 Meanwhile, this here beast is enjoying a snorkelling safari better than our puny human money can buy. With its giraffe-like neck, hippo-like face and dugong-like body, Dicraeosaurus was a bizarre creature indeed. Still, this is a good opportunity to admire the artistic skill of the illustrator; in depicting such tangible textures (I could make a drinking game out of this post), masterful shading and adorable fishies.

Diplodocus also makes an appearance, and is in more dire need of moisturiser than a thoroughly modern gentleman in a cosmetics advertisement. The geezer clearly needs to get back to his deep lake, where he could “still breathe very nicely without poking his whole head out of the water”. And you wouldn’t want to do that – your bonce might get mashed up in the jaws of the every-hungry allosaurs lurking on the shoreline. 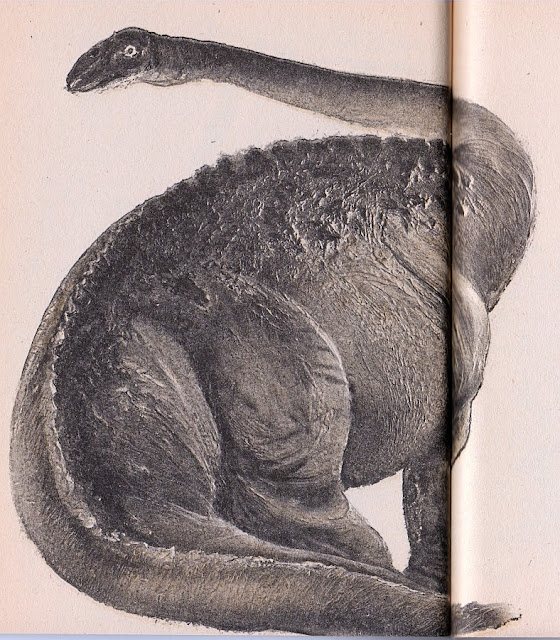 Here is Brachiosaurus, a beautifully textured (take a shot!) mound of misshapen stucco flesh. Behold its sad gaze and edge-of-the-pie-dish crest. There is something peculiar in this collision of artistic prowess and complete lack of scientific reference. This is where decades-old dinosaur books differ from the modern day – even when the dinosaurs were grotesquely unscientific, the skill of the artist could still render them beautiful in their own peculiar way, as opposed to looking like rejects from a foggy N64 shoot-’em-up. And that’s why I’m still plugging away on this blog! That, and the plaudits. 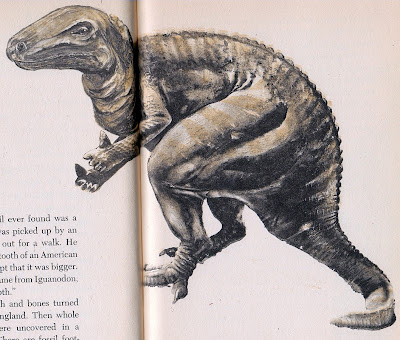 Dinosaurs and more Dinosaurs might boast a significant number of relatively obscure beasts when compared with similar books, but that doesn’t mean it shies away from the staples. Here, for example, we have an Iguanodon, easily identified by its approving hand gestures. There’s something particularly peculiar about the head on this beast – it seems to have borrowed the head of a theropod from a more sober book (in DaMD, it would have dozens of moray-like teeth and/or a snaking tongue). The oddly humanoid proportions of the forelimbs are, of course, entirely in keeping with contemporary depictions of the animal. All in all, this one isn’t too ‘out there’; it’s not like it’s scaling a tree trunk, flicking out a lizardy tongue and brandishing a feathered tail, for example.

Yeah, you saw that one coming, I know. In any case, Hypsilophodon is hardly known for bringing the crazy; the poor little creature is normally depicted scurrying around (or running hastily away from) much larger, more awesomebro species. Sure, there was the infamous ‘tree kangaroo’ Neave Parker depiction, but even then it was just standing around, looking suitably placid and harmless. Leave it to Solonevich to make even this most innocuous of animals into a creeping, crawling nightbeast with many-jointed limbs, a feathered (or is that beaver-like?) tail and Venom’s tongue. By comparison, the gangly, vertical Ornithomimus on the right looks very conventional indeed, and there is something quite beautiful about its lovingly ‘sculpted’ legs. 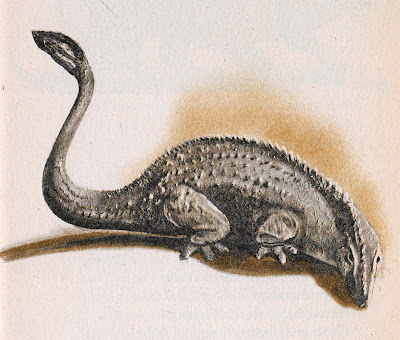 Speaking of the conventional versus the very unconventional, the majority of the book’s ankylosaurs follow the era’s rather dull tendency to produce squat, short-tailed, no-necked armadillo-turtles. This more unusual depiction, then, is surely to be welcomed, even if it looks still more outlandish. The bony nodules are superbly painted – it’s almost possible to get a tangible sense of how rough this animal’s hide is – but I’m sure you’re nevertheless wondering what on Earth this thing is supposed to be. Well, it’s Pinacosaurus (here identified as Syrmosaurus). Hey, at least it’s got a nice long tail, right? 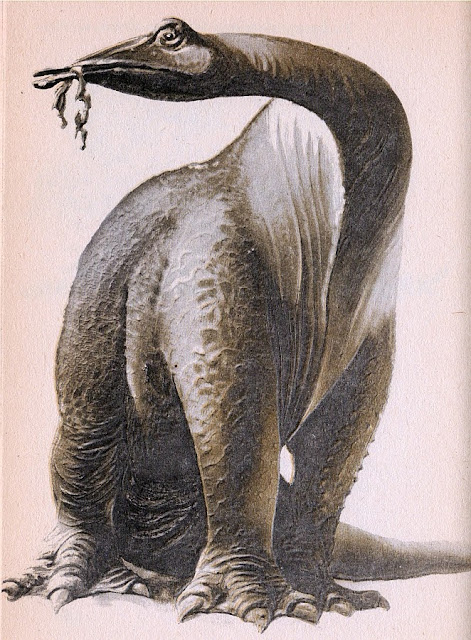 Now here’s a fun exercise in pointless hypothetical alterna-history – what if, just as Waterhouse Hawkins was sculpting the mighty Crystal Palace monstrosities, someone had tripped over a hadrosaur skull weathering out of a hillside somewhere? What would have happened had Hawkins hurriedly incorporated it into his dino designs? I like to think that the result would have looked something like the above. I’m particularly fond of the melty feet and hugely thick neck and tail. Magnificent stuff. 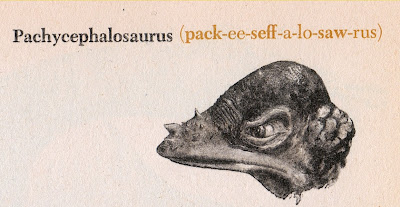 While the above Anatosaurus (aka Anatotitan, aka Edmontosaurus) is furnished with the full-mega-portly-body treatment, only the head of Pachycephalosaurus is shown. There’s a good reason for this, of course; Pachycephalosaurus isn’t known from very much else, so any full-body reconstruction would be subject to a great amount of speculation, and might end up looking a bit freaky some decades down the line. 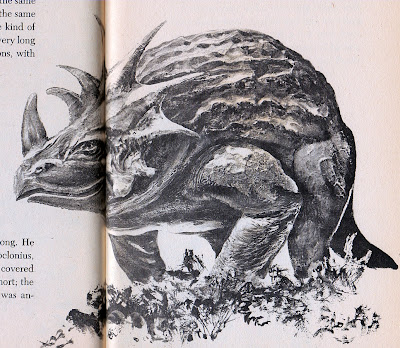 If you want marginocephalians in all their glory, you’ll have to consult the ceratopsian pages. The above animal has a masterfully textured toad body. Somehow, it’s ended up with the (not all that bad, for the time) head of a Styracosaurus. I’m sure it’s a mask. 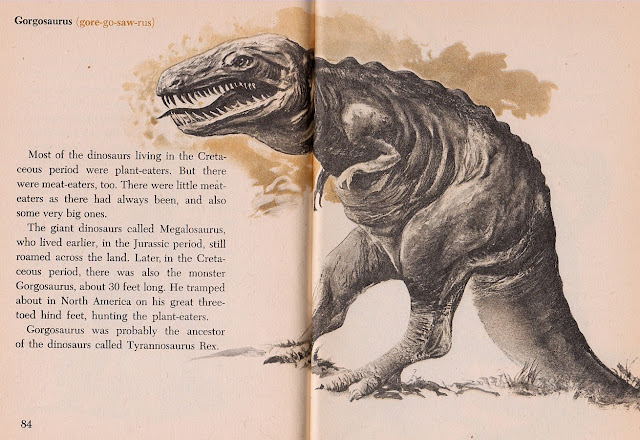 Of course, bring in the ceratopsians, and you also have to present their perpetual foes. Opposite Styracosaurus we have the frightful Gorgosaurus, a cross between a hen, a snake and a Cornish pasty. The character that Solonevich brings to this hunchbacked killer pastry is fantastic; note also the way in which the viewer’s eye is expertly drawn to that hideous, bristling maw. Nevertheless, there’s only one animal we could possibly end on… 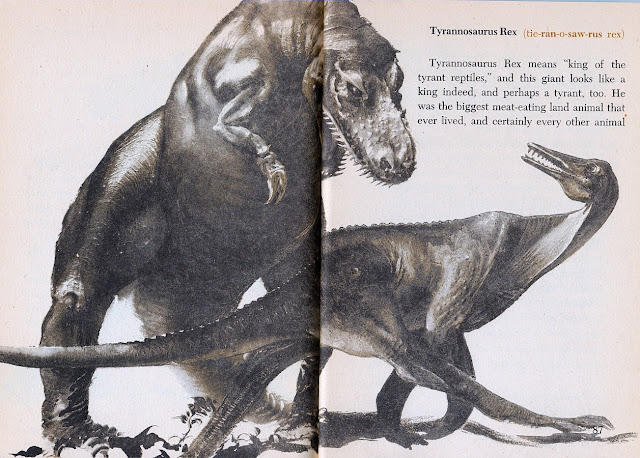 Disappointingly, Solonevich’s Tyrannosaurus isn’t particularly unusual for the time; there are definite shades of both Neave Parker and, especially, Zdeněk Burian. This Rexy is a dead ringer for Burian’s monochrome Gorgosaurus, in particular, right down to the gleaming, greasy skin textures. What the prey is intended to represent isn’t mentioned. Dave Hone noted that its head looks remarkably like those on contemporary reconstructions of small pterosaurs like Rhamphorynchus; the combination of this mismatched head, extremely thin skin-flap neck and leggy bipedal body is a bit of a mystery. We can only assume that, as with so many of the other illustrations in this book, Solonevich just thought it looked pretty damn…interesting. And it certainly does.