Published by The Trumpet Club (great name) in 1990, New Questions and Answers about Dinosaurs is exactly the right age to be the sort of book that I might have encountered in my very first years learning about dinosaurs. Except, I didn’t – perhaps it was more widely available in the US than over here, for that is where this copy came from, sent over once again by Herman Diaz. (Thank you Herman!) In terms of the artwork, it’s a curiously retro little volume for 1990, moreso than its cover star might suggest… 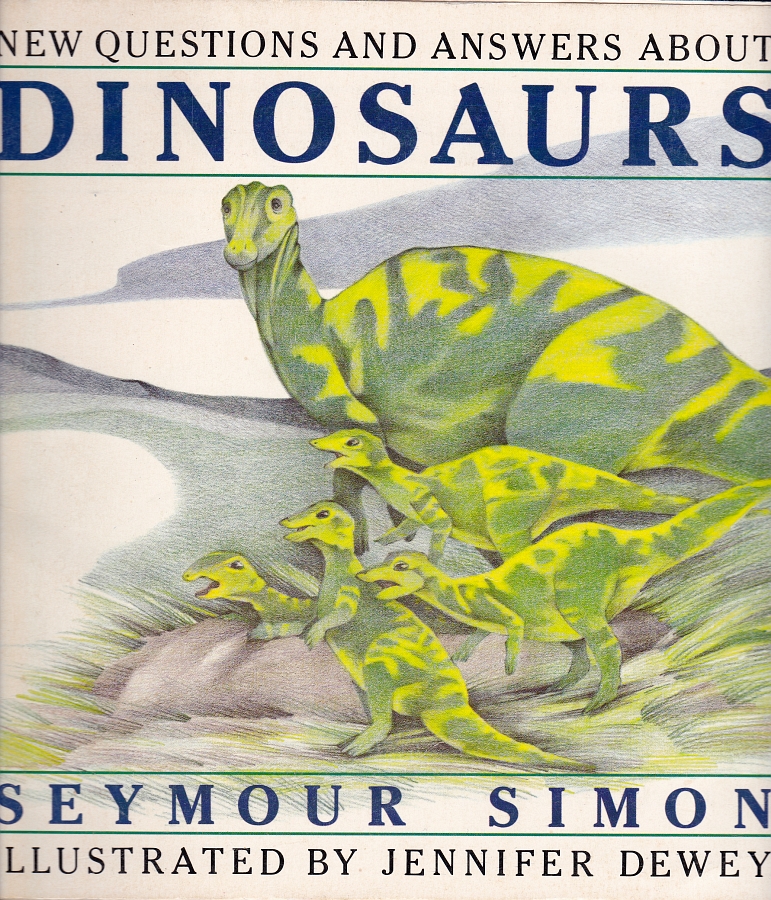 If that ornithopod looks a little familiar to you, that’ll be because it’s most certainly based on Sibbick’s Ouranosaurus from the Normanpedia, albeit with the neural spines significantly reduced, of course. This suggests that the book will be yet another one from the early ’90s to be full of Sibbick clones, but actually, that’s very far from being the case. Artist Jennifer Dewey is a highly accomplished illustrator of natural history with a style seldom seen applied to dinosaurs; being British, I’m naturally reminded of the work of Raymond Briggs. However, she’s no dinosaur specialist, and her dinosaurs have a distinctly old-school flavour, clearly derived from the works of artists in decades prior. Just not Sibbick…much.

Dewey’s approach to sauropods definitely harks back to the ’70s and earlier – they’re almost all grey, lumpy, and quite bloated-looking, with her Supersaurus being obviously based on a Zallinger Brontosaurus. I had to pick out the Diplodocus, though, mostly for the very charming background and composition – the graceful curve of the animal’s tail almost forming part of a pattern with the sky and ground. It also just looks really rather jolly and pleased with itself.

There’s little Saltopus too, of course, no longer regarded as being a ‘true’ dinosaur by anyone these days. At least it has some natty stripes. Author Seymour Simon additionally mentions Dromaeosaurus, describing it as being “about as tall as you are,” which I can’t help but feel could vary a hell of a lot depending on the age of the kid reading the book. Oh well.

While Dewey’s sauropods – and, in fact, dinosaurs in general – in this book tend to be rather monochromatic, there is some room for a little experimentation in dinosaur skin colouration. Since the idea of this spread is to show off the sheer variety of dinosaurs known as per 1990 (as many as 350!), it makes sense to compliment the animals’ varying forms with equally varying colour schemes, even if an awful lot of them do have a very similar stripy pattern. Hey, you can’t argue with stripes – they always look dashing. The reconstructions here do tread a fine line between ‘stylised’ and ‘blobby and a little indistinct’, with some creatures turning out better than others. It happens. I can’t help but wonder if that countershaded sauropod is based on Sibbick’s Camarasaurus, but that would run counter to what I said earlier, so best let it go, eh?

Since I’ve so rudely chopped the title off the above spread, I’m happy to inform you that it’s “WHERE HAVE DINOSAUR BONES BEEN FOUND?”. And the answer, of course, is absolutely every-bloody-where, but the illustration obviously focuses on China. Here, Yangchuanosaurus wonders why Huayangosaurus is standing quite so diagonally. I’ll admit that the latter does look a little like Sibbick’s Tuojiangosaurus, especially given the positioning of the hind legs (it would also make more sense for Tuojiangosaurus to be here, as Huayangosaurus is rather older than Yangchuanosaurus). The Yangchuanosaurus’ body looks familiar, too, although I can’t quite place it just now (early Steve Kirk?) – feel free to chime in in the comments. I mostly wanted to remark upon its very crude-looking head. That’s one ugly, ugly head. How does it articulate with the neck? I think it might have been done close to deadline.

The book isn’t arranged quite as a journey through time, but seems to end up being one nevertheless, with Cretaceous dinosaurs following their Late Jurassic counterparts. Naturally, Tyrannosaurus puts in multiple appearances. Here, it’s being menaced by its “natural enemy” Denversaurus, an animal that seems to appear surprisingly infrequently in artworks alongside the Tyrant Lizard Emperor King-Queen (© Paul 2022). That might have something to do with its taxonomic history, having been known by a few different names over the years (and sunk into Edmontonia for a while). The spiky one appears surprisingly active here, contrasting with Rexy, who is virtually in a pre-Renaissance tail-dragging tripodal guise. The latter’s pose does remind me a bit of Rod Ruth’s work in The Album of Dinosaurs, except Ruth managed to make the animal notably more dynamic-looking. The ankylosaur also looks familiar, but again, I can’t quite place it. Bakker, maybe? That wavy tail is a little odd.

Wherever Tyrannosaurus appears, Triceratops will surely follow. These grey beasts look a little…peculiar. Massive, for sure, with excellent shading, but also rather overweight, while the anatomy of the individual on the right appears to go a little awry in places. The animals here are also all uniformly grey-brown, which is rather dull given the stripy shenanigans we saw earlier. To top it all, Ankylosaurus is replaced with a retro Scolosaurus straight out of a Burian painting – in a book published in 1990. This isn’t my favourite spread.

Rexy gets a spread to himself, of course, as is stipulated in his contract. This illustration is definitely based on one by another artist that I believe was actually intended to depict Gorgosaurus menacing Scolosaurus, which was itself a riff on a Burian illustration of the same. Again, though, I can’t find it. (Lazy? Me?) I rather like the stylisation here, even if the reconstruction is a little retrograde for 1990.

It’s best we just politely ignore that skull in the lower left, as if we’d just found a copy of Man After Man on a friend’s bookshelf. 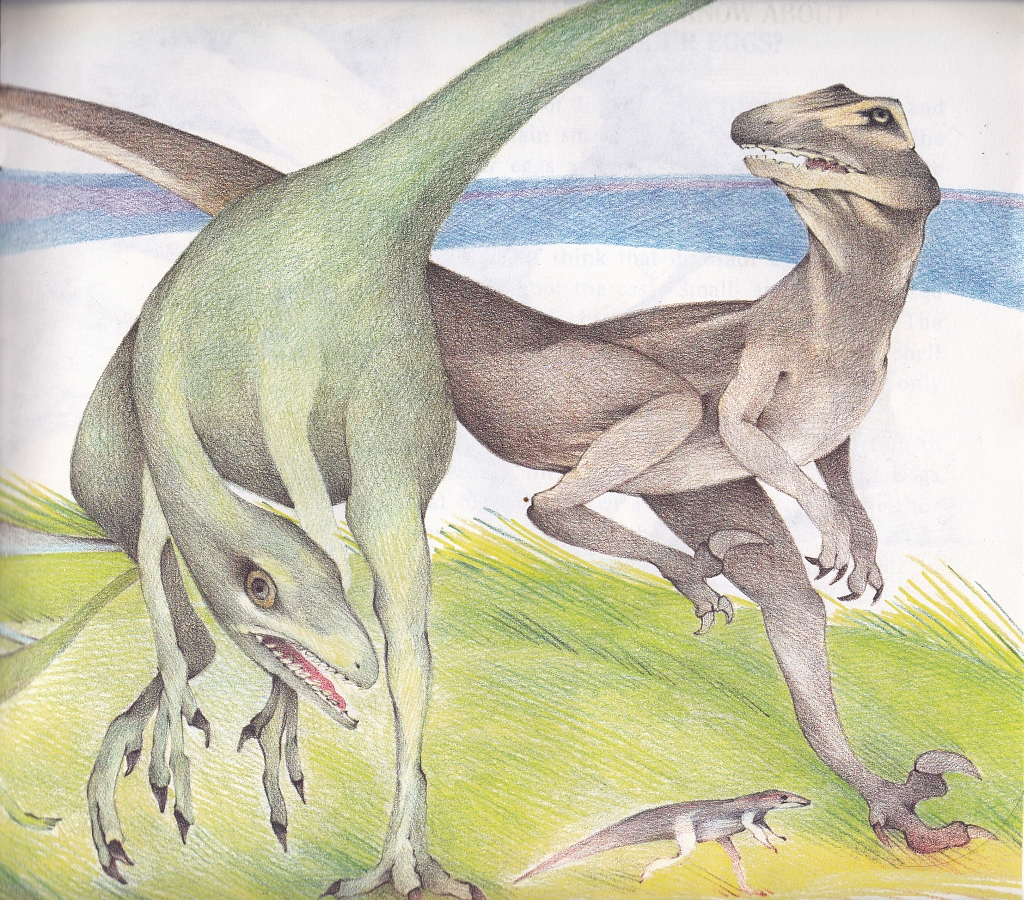 Did you know that some dinosaurs might even have been SMART? Not Rexy, of course – there was no way that Tyrannosaurus was developing sophisticated language and culture, and fashioning fallen trees into toothpicks or what have you. But some of the smaller theropods might have been, you know, not all that stupid for a Mesozoic reptile. The two larger animals here aren’t named, but I’d hazard a guess that the creature on the left is a troodont (based on the work of Ely Kish?), while the one on the right is Deinonychus, complete with Bakkerian throat wattle. For this book, the pair are unusually dynamic, and I do again love the treatment of the background, with the blue stripe adding further dynamism to the scene. I’ll add that I’m quite sure the Deinonychus is based on a specific illustration by another artist, too, but having reviewed so very many popular dinosaur books over the years, I have grown weary beyond my years, my days spent rocking slowly in a chair, babbling about tail-dragging dullards and the Normanpedia and the Dinosaur Renaissance and and…the point is, I can’t remember.

And finally…some non-dinosaurs! For you see, not every large reptile that lived during the Mesozoic was a dinosaur. Here, we see the mighty Late Cretaceous giant metriorynchid Deinosuchus alongside one of the famously toothless plesiosaurs, while a penguin-bodied Burian-riffing Pteranodon glides gracefully overhead. What diversity! There’s also a massive placoderm fish here, dropped into the scene with no explanation provided in the text whatsoever – why not? It’s the inclusion of Dunkleosteus (I know it’s labelled Dinichthys, but it’s Dunkleosteus) that truly elevates this piece to being entertainingly baffling. I love it, and I will say (most genuinely) that the water is quite excellently done.

Coming up next (from me): some stamps, I imagine!

Vintage Dinosaur Art: Creatures of the Past – Part 1