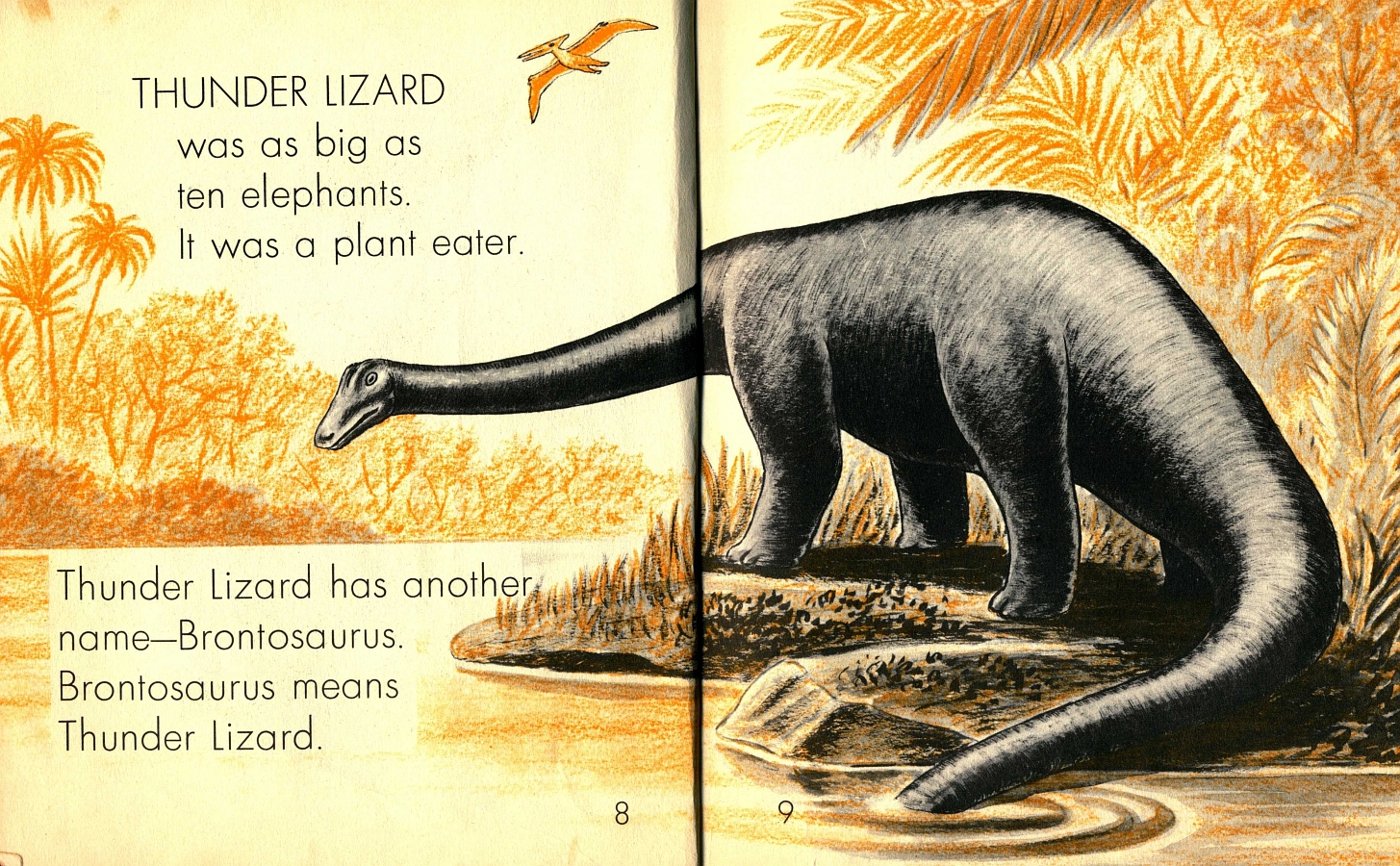 It’s very rarely that we get a book on here with a title that really appeals to me, but this has got to be one (even if it’s not quite up there with WHEN DINOSAURS RULED THE EARTH.) Originally published in 1955 as My Easy-to-Read True Book of Dinosaurs, I much prefer the title on the cover pictured below – The True Book of Dinosaurs. Yes, it’s the one true book of dinosaurs, the one dinosaur book to rule them all &c. &c. Well, not really; it’s pretty standard kids’ fare for the 1950s. But it’s good clean fun all the same.

Again, I must doff my cap to Charles Leon for sending me the scans and providing pertinent information. You’re a gent.

Title aside, the rest of the cover isn’t terribly appealing – it’s a rather minimalist, spartan design, with an ornithopod’s skeleton posed against a plain black backdrop. Other editions are similar. Happily, the illustrations inside – by Chauncey Maltman – are much more lively and detailed. Although brown-and-black-and-white, Maltman makes sure to include copious lush background foliage and small details to enthrall young 1950s readers. Always a good sign of a worthy illustrator. 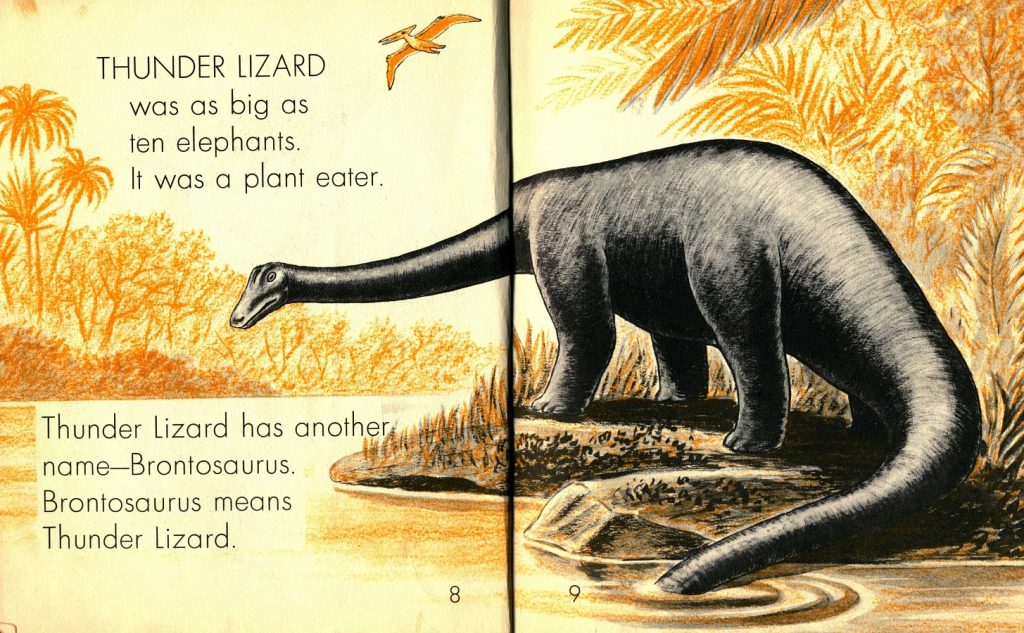 Inevitably, the book consists of a series of short profiles of prehistoric beasties (not just dinosaurs), with the first out of the gate being Brontosaurus, aka THUNDER LIZARD (which is also the title of the next Mastodon album). There’s plenty of the aforementioned lush foliage in this scene, which helps a huge amount in making it visually engaging. The brontosaur isn’t too bad for the time/type of book, but the wee Pteranodon stuck up in the sky makes me laugh. It looks like someone’s pasted in a sticker.

UPDATE: About two minutes after I posted a link to this post on Facebook, Aki Hubbard pointed out that this is a “vintage Bronto with what ultimately proved to be the correct head”. And it IS unusual to see such a long, low, Diplodocus-like head on a Brontosaurus illustration of this vintage. Very well spotted, and it makes me wonder why Maltman deviated from the norm in this case…correctly as it turns out!

Brontosaurus is too big to confine to one spread, and so makes itself comfortable over the following two pages as well. And what do you know, the great gallumphing oaf is just standing around in the water, ‘cos it was clearly way too big to support its own body weight on land. I mean, look, I can’t possibly see how this could work. Those tails look really long and heavy, and it doesn’t matter how many pneumatic cavities you have to lighten the load, there’s no way that fat apatosaur ass was being hauled across the terrain by anything’s four columnar legs. Now give me my HarperCollins book deal. Logical fallacy? What logical fallacy?

Special mention here must go to Ingunn Aasland over on the Fezbooks, who said that “the way the limbs are just a tube attached to the spine may have something to do with their walking difficulties“. It’s true that Maltman doesn’t really consider how shoulders and hips work in this illustration. But the plants are nice.

Where the THUNDER LIZARD leads, the ARMOURED LIZARD soon follows. (Wait, that isn’t what that means…) The two stegosaurs here appear to have been, er, heavily inspired by different Charles Knight paintings; the similar skin textures are quite effective in making them look of-a-piece, but the variable proportions are a dead giveaway. It’s quite a pleasing composition all the same, and look at those trees. The trees are lovely. People should probably just start filling dinosaur books with gigantic illustrations of trees interspersed with minuscule dinosaurs, and I’ll buy them all without blinking. That John ‘Most Influential Palaeoartist’ Conway has the right idea.

There was once a leaping lizard, and he walked a leaping mile. He found a leaping sixpence upon a leaping stile. Where DID this peculiar “Laelaps” (Dryptosaurus)/Allosaurus confusion come from? Regardless, I do enjoy how much this one looks like a cheap hollow toy from the 1980s, complete with tottering upright posture and sly, toothy grin. The weirdo sauropod is quite right to be alarmed. The snakelike scaliness on the theropod is rather pleasing, as are the stripy palm trees in the background. TREES.

Now it’s quite usual that in a book of this vintage, an allosaur will go after a sauropod that, having waded to close to the shoreline, is suddenly utterly helpless. But not here! Instead, the sauropod uses its huge, muscular tail to fight back, and the allosaur’s expression just says it all. I must say that this is rather stirring stuff for a 1950s book; I’m more used to seeing sauropods meeting a bloody Zallingerian doom. Go, brontosaurs, go!

Epic sauropod battles or no, everyone’s really just waiting for Rexy to show up, so here he is. Sporting peculiarly three-fingered hands, the upright TYRANT KING smiles and waves hello to a bathing ankylosaur, who just looks nonplussed. This tyrannosaur has definitely been cribbed from somewhere, but due to my advancing years (thirty of them!) I can’t quite remember where exactly (feel free to chip in, as always). It has a rather Sinclair at New York World’s Fair vibe, although of course it predates those models by some years. In addition to the chubby, somewhat humanoid arms terminating in incongruously three-fingered hands (yes, even for the time), the uniform interlocking teeth are quite adorable. Bless that tyrannical, carnivorous maniac. 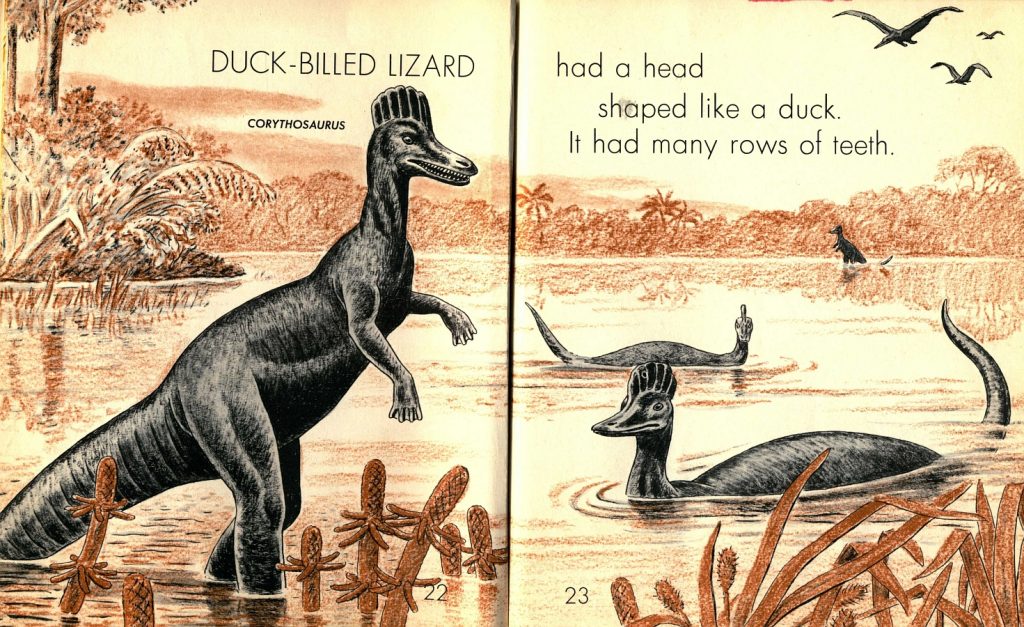 Rexy is followed by a certain crested hadrosaur, and, well, that’s definitely not what that name means. I get the impression that Maltman didn’t have too many references for this one, and opted to use illustrations of “Trachodon“, making some slight alterations along the way. The ‘gangly dork hadrosaur’ look and webbed hands (with adorable baby fingers!) appear very silly now, but were quite normal for the time. The teeth in the animal’s beak are more unusual – perhaps a misinterpretation of “many rows of teeth”. Anatomical errors aside, this is quite a nice piece; I like the differing poses of the animals, the varying vegetation, and the overall composition very much. 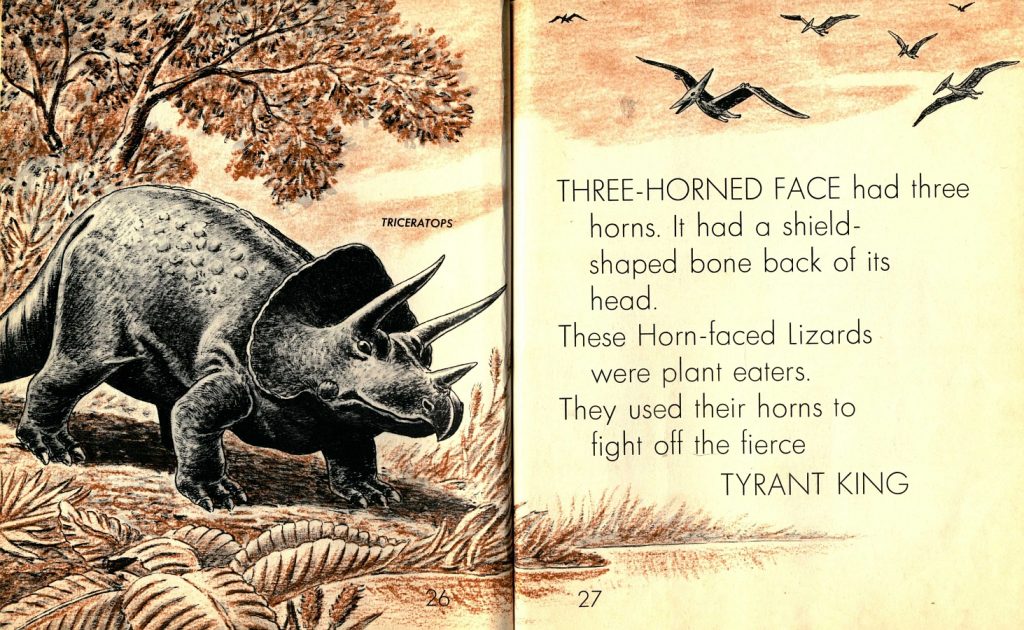 And finally…Triceratops, in a very Knightian guise. This is one of the most competent illustrations of a dinosaur in the book, with pleasingly muscular thighs and shoulders, horns in all the right places and a frill that’s, well, a bit too triangular. Close enough, I guess. It looks quite convincing as a real animal, rather than something fantastic and/or with alien anatomy, and has a few nice touches, such as the flap of skin between the thigh and the body and the raised nodules on the back (although, ahem, Knight did do this too). The shading’s rather good, to boot. The silly Pteranodon in the top right are a little unnecessary, but at least we get one more lovely tree. TREES! 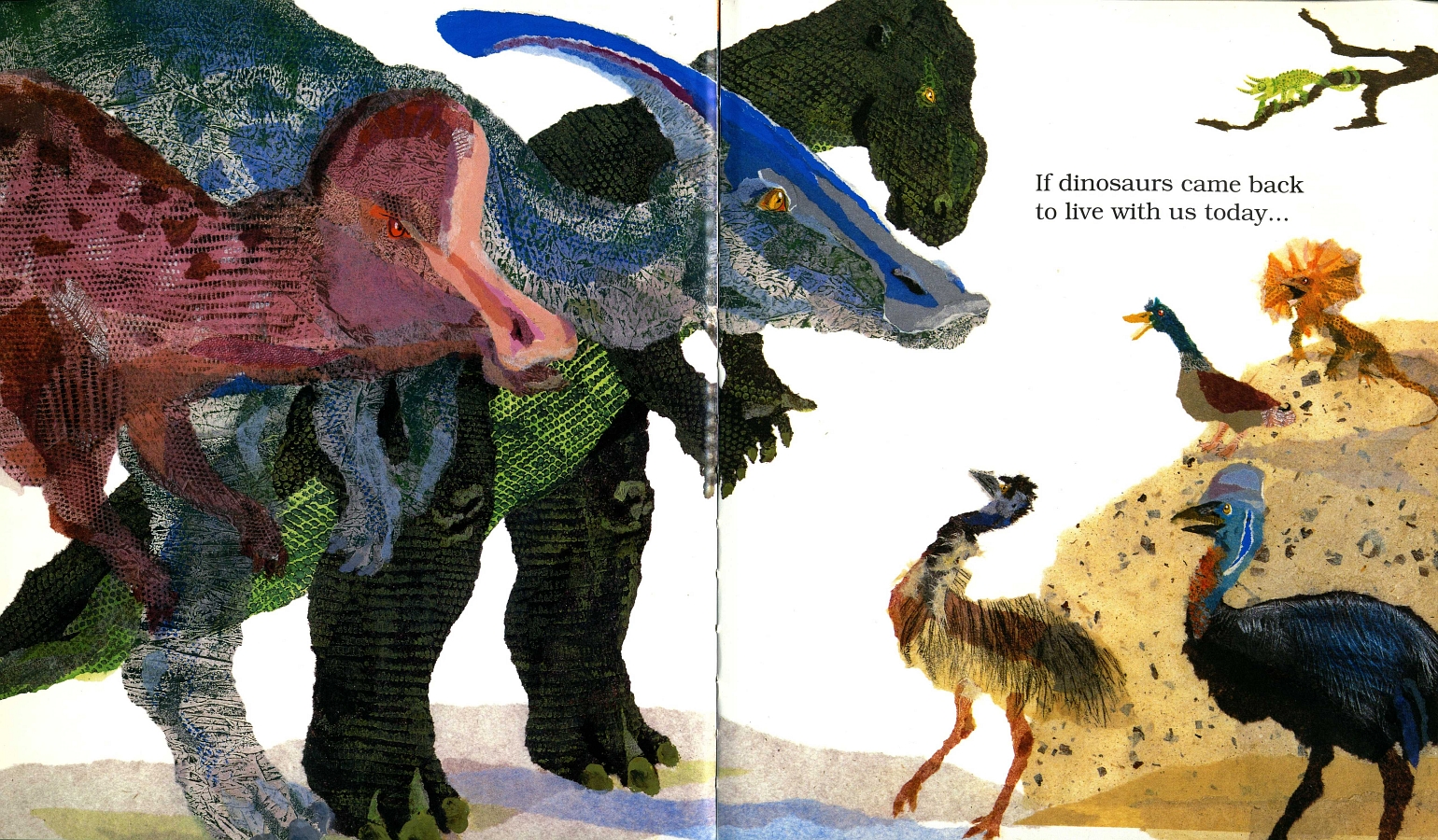 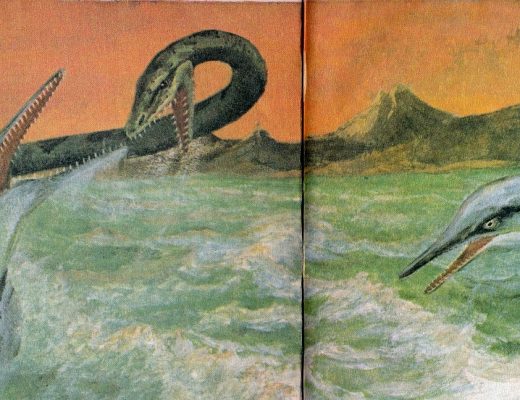