Here’s another golden oldie from LITC 1.0! All the way back in April of 2010, I shared some pages from a very special title. Enjoy!

Volume 6 of Walt Disney’s Fun-To-Learn Library, published by Bantam in 1983, was titled Real Life Monsters. In it, Mickey takes Goofy on a globe-trotting, time-traveling trip to find well, real life monsters. This mainly means “reptiles.” No illustrators or writers were credited.

Through the magic of Disney, Mickey takes Goofy back in time to check out some dinosaurs. It isn’t long before Goofy witnesses something that will surely scar him, robbing him of the innocence that makes up such a big part of his bumbling charm. Mickey, hardened to the reality of nature’s brutality, watches the slaughter as Goofy turns away in a vain attempt to erase the horror from his memory. It is futile, Goofy. You will never be the same. 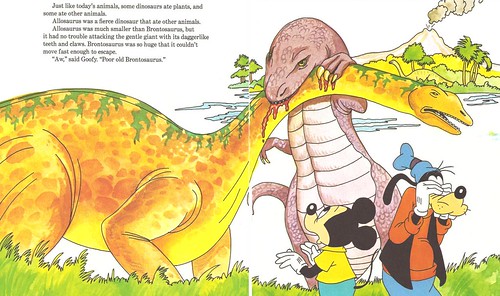 Yes, Goofy, sauropods were the ultimate moveable feast, spending their lives dimly dreading the inevitable moment when some bored theropod decided he was a bit peckish, and might enjoy gnawing on a sauropod neck, Nothing to do but accept your fate and groan in wan protest. I love the expression on bronto’s face there. “Aggghhh, that’s my neck, dickweed!”

Mickey might be forgiven if he at least gave Goofy a sound education. But alas, he commits that most basic of errors, calling any big old dead reptilian thing a dinosaur. 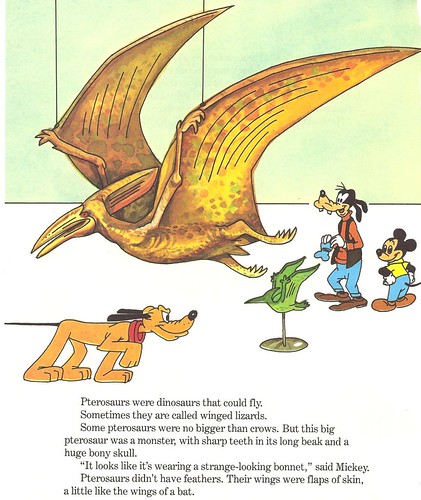 Maybe he doesn’t explicitly call (the ELEPHANT-SIZED) Dimetrodon a dinosaur, but what else is poor Goofy supposed to think? It’s included with the dinosaurs, and Mickey makes no effort to explain what it really is. So shame on you, Mickey. 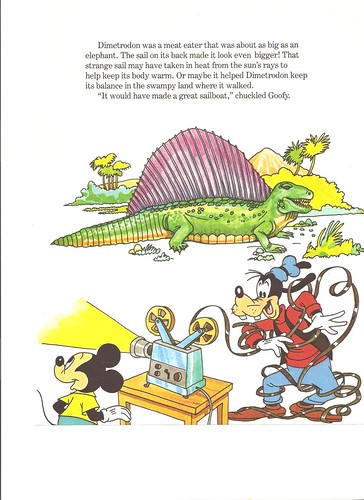 The idea that the sail was used to help Dimetrodon “keep its balance in the swampy land where it walked” definitely ranks up there with the silliest paleontology hypotheses I’ve ever heard. If anything, I imagine it would make balancing harder… oh balls, I’ve fallen into Mickey’s little trap. I’m not going to debate him. He’ll just Gish gallop me and I’ll never finish this post. So here’s a dyspeptic blue Stegosaurus. I’m out. 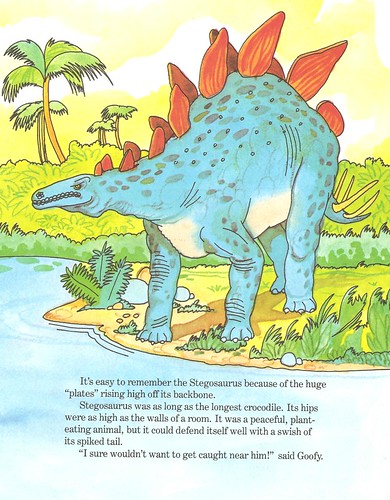